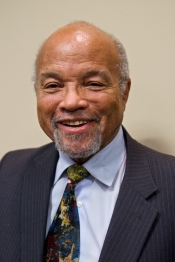 Dr. Butcher, 76, is an institution in San Diego’s medical, philanthropic and sports communities. He’s been in private practice in Southeastern San Diego for decades. He is president of the Care View Medical Group and past Chief of Staff at Alvarado Hospital. He’s also past president of the San Diego Medical Association and has served on many boards.

Dr. Butcher has been a local champion on a variety of fronts to combat chronic disease in low-income neighborhoods. African Americans have the highest rates of these diseases locally and across the country. For example, African Americans who live in Southeastern San Diego are nearly 80 percent more likely to die from diabetes compared to all county residents.

He co-led the effort to create the Multicultural Health Foundation, which is dedicated to finding community-based, innovative solutions to health disparities in the San Diego region.

“We believe that when the history of this dynamic period of struggle is written, your name will be deeply etched in its fabric as having inspired and challenged physicians and medical professionals nationwide to address critical issues of health care and medicine,” said Dr. Lawrence L. Sanders Jr., the president of the National Medical Association in a statement announcing the award.

Dr. Butcher and his wife, Vickie,  are community leaders for local and international causes. The couple co-founded the non-profit organization Water for Children Africa, which provides safe, sustainable water to rural villages in Africa in addition to educating people about safe health practices.

He’s volunteered as the team doctor for Granite Hills High School for more than 35 years and as the general physician for the Amateur Boxing Association of San Diego.

congratulations to Dr. Butcher on receiving this award. It is always great to be recognized and you most certainly deserve it. I know the San Diego community has certainly appreciated all you have done through the years.