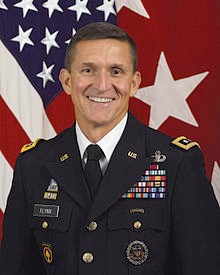 Flynn, in his resignation letter, said he “inadvertently” briefed Pence with incomplete information; Flynn said he apologized to the President and Vice President.  He had repeatedly pushed for close ties with Russia, a departure from long-standing U.S. policy since the Cold War era.

Trump, in characteristic fashion, responded to the controversy today on Twitter.  He did not address the concerns over Flynn or Russian blackmail concerns. Instead, he tweeted, ”The real story here is why are there so many illegal leaks coming out of Washington? Will these leaks be happening as I deal on North Korea, etc.?”

White House Press Secretary Sean Spicer said the President asked for Flynn’s resignation due to an “evolving and eroding level of trust,” the BBC reports.

Trump aide Kellyanne Conway remarked, “In the end, it was misleading the Vice President that made the situation unsustainable.”

An MI6 British intelligence officer prepared a dossier provided to key U.S. officials recently which alleged that Russia had compromising information on Trump ranging from business dealings in Russia to sexual escapades.  Trump has flatly denied this.  However, some of the non-salacious portions have been affirmed by some other intelligence sources, the Guardian reports.

Now Senator Roy Blunt, a Republican member of the Senate Intelligence Committee, and Texas Senator John Cornyn, second ranking Senate Republican leader, have broken with their party and called for a full investigation into any alleged connections between President Trump himself and Russian officials.

But the Chair of that Senate Intelligence Committee, David Nunes, has thus far refused to investigate the Trump administration's Russian ties. Instead, he has declared he intends to pursue an investigation against leakers in the White House.

Democratic representatives John Conyers of Michigan and Elijah Cummings of Maryland say they have asked for a classified briefing from the Department of Justice and FBI.

““The resignation of Michael Flynn underscores the increasing and disturbing potential of Russia’s grip on the White House. It’s another instance of someone in the Administration, the other being the President himself, who could potentially be subject to blackmail by the Russian government,” Davis states.

“Congress has a responsibility to follow all the threads to reveal what this means to our national security and our democracy. There needs to be an outside, bipartisan, and independent investigation into Russian influence in the White House and the election. The FBI needs to step up its investigation into the financial and personal connections of the President to Russia. “

Senator Elizabeth Warren stated on Twitter, "“This isn’t a game. Reports say the Russians conducted a series of successful cyber-attacks on our elections to help elect Donald Trump. Reports say our own intelligence agencies have corroborated parts of a dossier alleging that Russia has compromising information about Donald Trump. Secretary of State Rex Tillerson has close ties to Putin. Commerce Secretary nominee Wilbur Ross has close financial ties to Putin buddies. Donald Trump is still making money overseas and may have financial ties to Russia. Nobody knows since he STILL won’t release his taxes.”

The Massachusetts Democrat added, "This. Is. Not. Normal. President Trump owes the American people a full account of his Administration’s dealings with Russia, both before and after the election. When did the White House know that Flynn lied? What other contacts with Russia occurred during the campaign? Who knew what? Who approved what? Congress must pull its head out of the sand and launch a real, bipartisan, transparetn inquiry into Russia. Our national security is at stake."