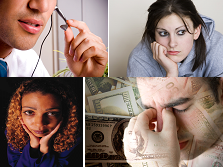 September 7, 2011 (San Diego) -- Recent local tragedies, including murder suicides in San Diego and East County, highlight the importance of seeking help for yourself or a family member during times of emotional crisis. Suicide prevention is everyone’s business--and anyone can participate in National Suicide Prevention Week, September 4-10, 2011.

The San Diego Police Department, which recently lost one of its own officers in a murder-suicide tragedy, invites everyone to “Call Before Crisis” and realize that suicide is a preventable health problem.

Suicide claims approximately 1 million lives worldwide, every year. In the United States, someone completes suicide every 15 minutes and another 865,000 people attempt suicide annually. Experts believe that most suicidal people don’t want to die; they just want to end the pain they are experiencing. Suicidal crises tend to be brief and, when suicidal behaviors are detected early, lives can be saved.

In recent years, the San Diego Police Department has handled an increasing number of crisis calls. In 2008, officers responded to 8988 service calls to deal with suicidal subjects or others in a mental health crisis. In 2010, that number increased to 10,833 calls. “We are projected to assist over 12,000 individuals in crisis by the end of 2011,” says Lt. Andra Brown with SDPD.

The Police Department has developed a strong relationship with County Mental Health (CMH) and private organizations, such as the National Alliance on Mental Illness (NAMI).

For information about resources available to assist those in crisis, or those who care about them, please see the National Alliance on Mental Illness (NAMI) website at www.namisandiego.org or call NAMI San Diego at 1-800-523-5933. The County Crisis Hotline is also available 24 hours to provide help to individuals in need at 1-800-479-3339.

"Suicide Prevention Week represents a call for action and involvement," a press release from SDPD observes. "Together, we can reduce the number of lives shaken by this needless and tragic death."