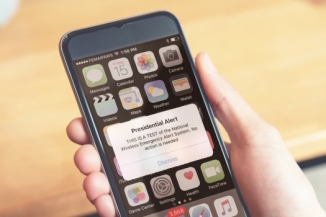 Photo:  the alert will look like a text.  Image via FEMA

October 2, 2018 (San Diego) - No reason to become alarmed. Your mobile phone will emit a special tone and vibrate as it receives an emergency test message on Oct. 3.  It is part of a nationwide test by the Federal Emergency Management Agency of Wireless Emergency Alerts systems to assess its effectiveness.

You don’t need to take any action for the test. In a real situation, the system would be used to warn the public about dangerous weather, missing children, or another critical situation that may require you to evacuate or remain in place.

The message is scheduled to be sent within 30 minutes of 11:15 a.m. PDT on Wednesday, Oct. 3 with a heading of “Presidential Alert.” It is the first nationwide test to wireless phones using this system.  Wireless Emergency Alerts do not require users to “opt-in,” and most mobile phones in use today can receive the 90-character text-like messages. Wireless Emergency Alerts can be sent by the National Weather Service, local first responder agencies, the National Center for Missing and Exploited Children, and the President through a system devised by FEMA and the Federal Communications Commission.

The test will go out to participating wireless phone company customers whose phones are turned on and within range of an active cell tower.

At about the same time on Oct. 3, FEMA will also run a test of the Emergency Alert System on television and radio.