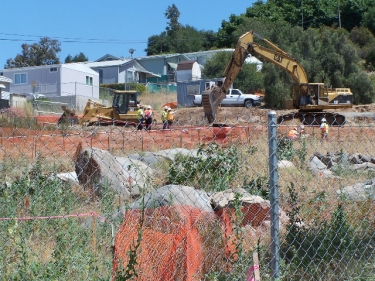 June 17, 2010 (San Diego) – At a hearing in San Diego yesterday, the state's Native American Heritage Commission declare the site of a proposed reservoir and pumping station to be a sanctified Native American cemetery. The Commission called for the site to be protective and ordered a halt all construction.

If construction is not stopped, the Commission  urged the California Attorney General to file suit against Padre Dam Municipal Water District.

The Viejas Band of the Kumeyaay Nation last week obtained a restraining order to halt Padre Dam from continuing to desecrate remains of Native Americans discovered during construction of the project. Padre Dam opted to proceed with developing the site despite a warning in 2007 from its own archaological consultant to avoid the site. In February 2009, human remains and numerous pottery shards dating back to 780 A.D. were unearthed at the site in a discovery deemed “unparalleled in the San Diego region.”

Padre Dam representatives argued that the District did not need to halt the project near I-8 and Lake Jennings, despite the fact that the District’s own reports indicated construction work would result in total destruction of the prehistoric archaeological site. A Padre Dam official contended that the Commission should stand behind a 2008 ruling that the site had no significant cultural resources—a ruling made before the recent discovery. That argument drew a swift retort from one commission member, who advised Padre’s spokeman not to lecture the Native American Heritage Commission on broken treaties.

In an interview last week, Padre Dam communications director Mike Uhrhammer told East Count Magazine that the District was “bleeding money” because of delays due to the discovery of Native American remains at the site. Padre tried unsuccessfully yesterday to persuade Commission members that a ruling in favor of Viejas could jeopardize other water projects around the state.

Robert Scheid, Viejas public relations director, had this to say in response. “There are water projects going on every day across California, and that’s because they behave differently than the Padre Water District. Padre has acted recklessly by disregarding its own expert’s advise. The message to other water districts is don’t behave like Padre Dam. There are procedures in place to allow projects to proceed while mitigating damages to Native American sites, but they disregarded all of that.”

As a ratepayer, I wish the water district would get to work on another location. I can understand that we need to preserve the Indian bones and items that have been found. So do that and move on, find out where else on the property you can build without digging up bones, etc. or, better yet, find a different location. Whoever is advising the water district needs to face reality, find a way to cut losses and move forward.