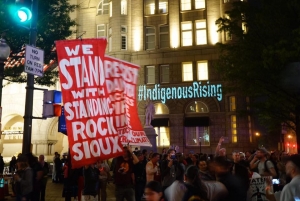 View video of round dance

April 27, 2017 (Washington, D.C.) -- Hundreds of Indigenous people from around the country converged on the Trump Hotel tonight to project messages of resistance, and hold a traditional round dance that shut down Pennsylvania Ave and 12th St NW for about half an hour starting at 9 p.m. Messages projected on the side of the Trump Hotel included “#IndigenousRising,” “Resist Trump,” “Resist Pipelines,” and “Renew Treaties.”

Speakers talked of the urgent need to keep fossil fuels in the ground, stop climate change, and resist Trump’s aggression towards Indigenous people in his first 100 days.

Native Nations from across the country are in town to lead Saturday’s People’s Climate March.

“Trump is going to do everything he can to eradicate us as Indigenous people. But we are going to stand up and fight back,” said Joye Braun, an early organizer in the fight against the Dakota Access Pipeline at the event. “It doesn’t matter what Trump tries to do, we are going to overturn it. When I was in North Dakota protecting our water, the police had water cannons on us for 8 hours in 27 degree temperatures. With everything they’ve thrown at us, we are still standing and we won’t stop now.”

Indigenous people and allies at the event chanted the now infamous anthem of the fight against the Dakota Access Pipeline: “Mni Wachoni, Water is Life!” and “Rise! Resist! Protect!” as they held a large round dance taking up a 6-lane intersection.

“Our land is on the line, our water is on the line, our families are on the line,” said Dallas Goldtooth, Keep it In the Ground campaigner at the Indigenous Environmental Network. “Our Indigenous relatives in Alaska are already experiencing the worst effects of climate change. We are leading the People’s Climate March to send a clear message to Trump that fossil fuels belong in the ground, and Indigenous people and our lands are not his sacrifice zone.”

At one point in the event, a man with a drum made it behind gates to lead chants and drumming directly below the “Trump Hotel” sign at the old Post Office Building.

“When Standing Rock happened, it was like a rebirth for many Indigenous people who were called to ceremony and to protect our rights,” said Faith Spotted Eagle, from the Yankton Reservation in South Dakota. “Despite all they have done to us, we are still here. These attacks are deliberate, and they are based on fear. But this climate march is an opportunity, a revitalization of all people of our nation.”