June 14, 2019 (In-Ko-Pah) – Native Americans running from the Fort Yuma Indian reservation in Arizona to the Sycuan reservation in San Diego’s East County, a 150 mile journey, sought  to draw attention to the plight of missing and murdered sovereign Native American women. On Friday morning, they wound up saving the lives of two women whose vehicle plunged off of I-8 east  into a rugged canyon.

Mazatl Tecpatl, one of the tribal members running across the desert in triple-digit heat, told ECM, “We saved two lives but another died…The Creator put us there for a reason.” 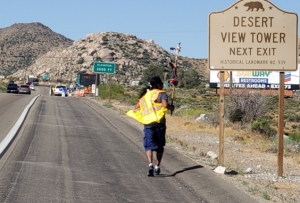 Just east of the In-Ko-Pah Road exit near the Desert View Tower, he says, “We saw a white car spin around.” The group waited for traffic to clear and then ran across the freeway, but the vehicle had disappeared.  “Then we saw the car down in the canyon,” he says.

According to a press release issued by California Highway Patrol’s El Centro office, the vehicle was a Nissan that veered off the roadway into the open desert, where the vehicle rolled over several times and came to rest in a trench on its side

The Nissan was driven by 73-year-old Leonila Aguilar from Yuma, who was traveling from Yuma with her sisters.  Aguilar suffered serious injuries. The front passenger, Rosa Huante, 70, of Yuma suffered moderate injuries and complained of pain.  The left rear passenger, who was 83 and resided in Encinitas, suffered fatal injuries. Her name was not released by the CHP.

Tecpatl says the runners were about to go into a prayer circle when the accident occurred. One runner called  911 and others ran down into the canyon. “The car had spun and flipped over. There was smoke,” Tecpatl said. Realizing that the car could explode, they knew they had to act quickly to rescue those inside.  So the runners used rocks to break through the vehicle's windows. 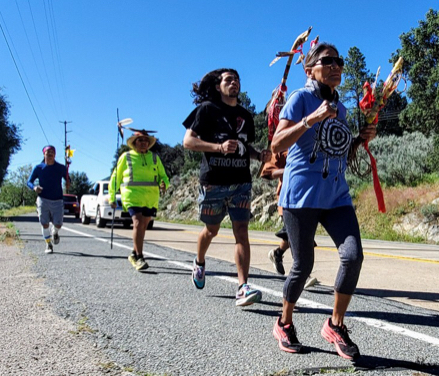 Two of the women each had a foot stuck in the wreckage, including one whose foot was bleeding and broken, according to Tecpatl.  “The third had a seatbelt around her neck. She was spitting blood, so I called an elder and I used a machete to cut the seatbelt,” Tecpatl says, adding that all the runners helped to extricate the three elderly women.

Tecpatl says the runners had extricated two of the vicitms before Officer Javier Amezcua, who was near the area traveling to San Diego for training, arrived on scene

Officer Amezcua says the good Samaritans on the scene helped extricate parties for treatment without further injury until other units arrived.  Amezcua, who also aided in extricating at least one victim, praised the runners for their efforts.

Tecpatl says it took about a half hour for an ambulance to reach the remote location.

The runners continued to their destination, arriving in time for a dinner to open a conference at Sycuan Resort on Missing and Murdered Indigenous People and Trafficking. They represented multiple Native American tribes including Navajo, Quechan, Paiute, and the Tohono O'odham nation.

Thanks to their actions, the survivors in the car that plunged off the freeway were saved from winding up among the missing or dead.

The CHP indicate the cause of the June 7th accident remains under investigation and says all parties were wearing seat belts.  The agency reminds motorists that use of 911 to report accidents or persons at risk helps save lives. 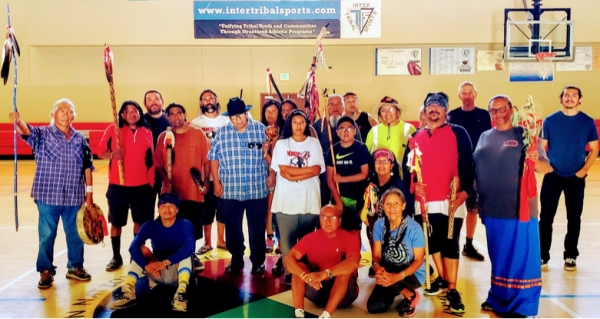 Yes I agree with Mazatl, our Creator put these folks on a chosen path. A reflective moment in time...