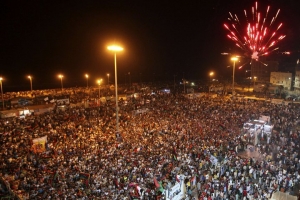 “We have met today with our operation partners to assess the situation in Libya,” Rasmussen said during a news conference. “We agreed that our operations are very close to completion, and we have taken a preliminary decision to end Operation Unified Protector on Oct. 31.”

The final decision will be made early next week, the secretary general said. In the meantime, he added, he will consult closely with the United Nations and the Libyan National Transitional Council in charting the way ahead.

NATO will wind down the operation through Oct. 31. Until then, the alliance will monitor the situation in Libya and retain the ability to respond to threats to civilians if needed.

“I am very proud of what we have achieved together with our partners, including many from the region,” Rasmussen said. “Our military forces prevented a massacre and saved countless lives. We created the conditions for the people of Libya to determine their own future. Their courage and determination in the cause of freedom is an inspiration to the world.”

NATO launched the operation following passage of United Nations Security Council Resolution 1973. The resolution called for member states to protect the people of Libya from their own government, as forces loyal to then-dictator Moammar Gadhafi were threatening the population of Benghazi, Libya’s second-largest city. The resolution also called for a no-fly zone over the nation and an arms embargo on the Gadhafi regime.

“We have carried out that mandate with remarkable success,” the Rasmussen said. “We mounted a complex operation with unprecedented speed and conducted it with the greatest of care. We were fast, flexible, effective and precise. We did what we said we would do, and now it is time for the Libyan people to take their destiny fully into their own hands.”

The United States is fully in tune with the alliance decision. "We support the decision by the North Atlantic Council to begin winding down Operation Unified Protector and await any formal decision to end the mission,” said Pentagon spokesman Navy Capt. John Kirby. “In the meantime, in keeping with the direction we have been given by the commander in chief, U.S. forces will continue to support the mission as appropriate."

The operation was a historic moment not only for the alliance, but also for the Libyan people, he said. NATO provided critical support in using air forces to stop Gadhafi’s forces from attacking civilians. “As a result of that effort, and particularly as a result of the efforts of the Libyan people, the future is now firmly in the hands of the people of Libya,” he said.

Once NATO took over the operation April 1, unique American assets fed the alliance. These included air refueling capabilities, reconnaissance assets, search and rescue capabilities and leadership in NATO’s command and control systems. “This allowed partners … to engage in military operations and bring about the changes on the ground that we have seen over the past few months,” Daalder said. “Now that Libya is truly in the hands of the Libyan people – with the expectation this weekend of the declaration of liberation of Libya – it is time for NATO to end the operation.”

During his news conference, Rasmussen called the operation a “special moment in history, not only for the people of Libya and the wider region, but also for the NATO alliance. It shows that freedom is the strongest force in the world.”

Thanks NATO and their member countries.
interesting facts