The division had 14 teams, and the hard work put in by the girls over the course of the season paid off when the team took first in its pool to move into the gold division. They then won three matches to capture the title, including a very tough and competitive three game semi-final match against Santee. They led the entire way in taking a two game match against East Lake in the final.

Coach Steve Frazier’s Navajo team consistently played hard throughout the day, with contributions from all the team members. The focus on effort and team work lead to screams and jumps for joy as the final whistle blew, confirming a close 2 point victory in the final game of the day. 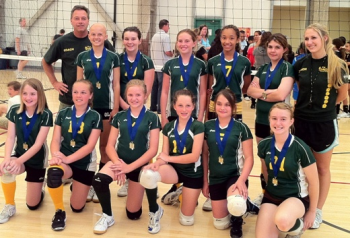 After winning the championship match Navajo Director, Ken Rutan could be overhead telling the girls that what impressed him the most was how they responded after losing the first game of the semi-final match by a wide margin. When others might have gotten rattled and started pointing fingers, they stayed positive, pulled together and continued to focus on putting forth their best effort. They showed the make-up of champions and were rewarded for it.

The Navajo club also had teams that took 2nd and 3rd in the U14 Gold Division of the County Championships. With 22 teams competing in their age division, Coach Randy Barnes’ team lost a close match to a highly skilled Tijuana team in the championship, and Coach Bob Pierce’s team beat Santee in the third place match.

Starlings began a with a single inner-city San Diego team in 1996. The founder and Executive Director of the non-profit organization is Byron Shewman.  He played volleyball at San Diego State University and is a former USA Men’s Volleyball Team member (1971-75). Shewman played and coached professionally in Europe, and is currently an author, a Contributing Editor of Volleyball Magazine and the Executive Director of Youth Without Borders, a non-profit focused on providing medical and educational assistance to youth.

Club volleyball has traditionally been a fairly exclusive sport. Starlings was started with the concept of broadening the opportunities for girls to play club volleyball and learn the life lessons that can be obtained from participation in sports. From its meager beginnings, Starlings is the now the largest junior volleyball club in the nation ─ serving over 3,000 girls in 50-plus clubs across America. Within San Diego County alone, the club has 75 teams based in various communities throughout the county.

The County Champion/Navajo U12 team, as well as other Navajo teams, will compete in the Starlings National Tournament June 16-18, 2011 in San Diego. For more information see www.starlings.org.