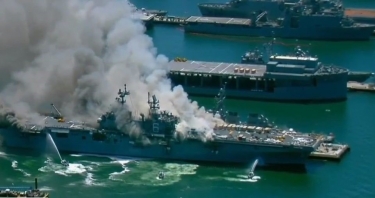 57 injured, including Navy personnel and civilians

Some East County residents have complained of irritation to eyes and skin. Heartland and San Miguel Fire departments both report receiving many calls from concerned residents. Any negative impact on air quality is of special concern during the COVID-19 pandemic, which has caused respiratory distress in many patients and a new shutdown order issued by Governor Gavin Newsom today of many businesses due to only 36 percent of ICU beds remaining available statewide as coronavirus cases spike.

Where smoke is present, San Diego County residents are urged to limit physical activity and stay indoors to limit exposure to particular matter. The County advisory makes no mention of other potential hazards, such as toxic materials including fuel oil. Rob Reider, director f the APCD, says the agency is working with the County’s Public Health Services and Department of Environmental Health, as well as te Navy to monitor air quality and advise the public if conditions change. 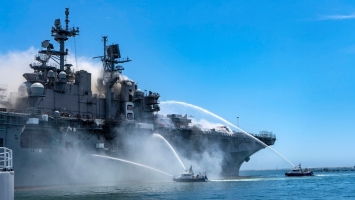 Since the fire began yesterday morning, 57 sailors and civilians have been injured, including five personnel who remain hospitalized in stable condition, according to Naval Surface Force Pacific spokesperson Lieutenant Cmmander Patricia Kreuzberger, the Navy Times reports.

Crews are battling to prevent the fire from reaching an estimated 1 million gallons of flammable fuel oil below deck, which could cause an explosion, and to prevent the ship from sinking and polluting the bay.

Temperatures inside the ship have reached 1,000 degrees – hot enough to compromise the structural strength of steel. Rear Admiral Phllip Sobeck told reporters today that the fire’s heat and duration means the ship likely cannot be repaired.  “I don’t think she’s coming back. I think she’ll be struck,” he stated.

The ship was near the end of a two-year, $219 million upgrade to support use of F-35B warplanes, one of only four large-deck amphibious vessels to be so outfitted. The modernization contract of the ship was with General Dynamics, National Steel and Shipbuilding Co., with options for up to $250 million

Loss of the ship would deal a “significant blow to the Navy’s plans to have F-35Bs continually deployed in the Pacific,” according to Defense News. The plan was to have at least four ships, with one always on deployment, one in an elevated state of readiness for surge during an emergency, one in maintenance, and another in pre-deployment workups.

An explosion triggered the fire, though the exact cause is not yet known. Damage form stem-to-stern has been extensive, engulfing the well deck, forward living and work spaces.  In addition, the forward mast collapsed onto the superstructure.

Homeported in San Diegoi, the ship is part of the Navy’s Wasp-class of amphibious assault ships being utilized to field a lighter F-35 carrier.

The USS Bonhomme Richard, which means “Good Man Richard” in French, was named after John Paul Jones’ frigate of the same name, which honored Benjamin Franklin, Ambassador to France at the time, referencing the “Poor Richard’s Almanac” authored by Franklin.