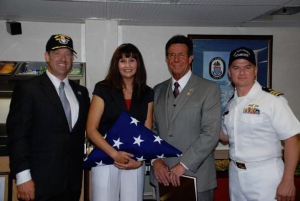 July 25, 2011 (Scripps Ranch)—Each Fourth of July for the past 12 years, Sheriff’s Homicide Captain Tim Curran and his wife, Debby, have displayed a flag the size of a two-car garage at their Scripps Ranch home. But on July 5, the flag was stolen and Debby was injured as the thief made a getaway.

The story drew national attention. While the crime remains unsolved, this morning the Currans received a new flag from the Captain and Command Staff of the U.S.S. Sterett aboard the guided destroyer at the Naval Air Base.

Captain Rich McDaniel of the U.S.S. Sterett saw the story and gave the Curran family a tour of the ship and a new flag today. The flag was also flown on the fourth and latest ship to be named after Master Commandant Andrew Sterett, who served during the undeclared war at sea with France from 1798 to 1800. The Currans and U.S.S. Sterett command staff also exchanged navy and Sheriff’s Department memorabilia.

The original flag was a gift from a colleague, Sheriff’s Deputy O.K. Jones, a retired Command Master Chief on the third U.S.S. Sterett. (The guided missile cruiser is now decommissioned.) To learn more about the U.S.S. Sterett, visit http://bit.ly/psfbtt.

On July 5th, Debby heard the dog barking. When she looked through the window, she saw a man snatching the flag. She tried to run out to the suspect’s SUV, but the driver hit the gas and she was thrown to the pavement, suffering scrapes and bruises.