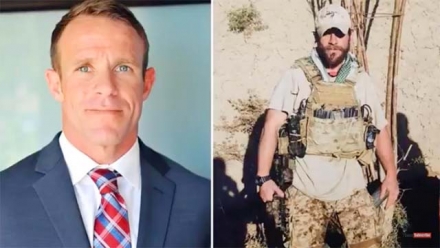 Update July 4, 2019:  Gallagher has been demoted in rank from Special Operations Chief to Petty Officer.

July 2, 2019 (San Diego) - A Navy SEAL accused of fatally stabbing a wounded teenage ISIS fighter in the neck, shooting at numerous Iraqi civilians and threatening fellow SEALs to keep them from reporting him was acquitted Tuesday of murder and other charges.

Special Operations Chief Edward Gallagher was acquitted of six of the seven charges he was facing. Gallagher was convicted solely of posing with the teen’s body in a photograph.

The verdict means Gallagher will walk away a free man. The charge for which he was convicted carries a maximum sentence of four months behind bars, which he has already served.

Gallagher, 40, could have faced up to life in prison if convicted of murdering the teen in May 2017, as well as shooting a male and female civilian and shooting at an unknown number of other civilians later that year in Mosul, Iraq.

The highly decorated veteran was acquitted of charges including murder, attempted murder, willful discharge of a firearm and obstruction of justice. The jury of five Marines and two Navy men began weighing Gallagher’s fate Monday afternoon.

Prosecutor Jeff Pietrzyk said in his closing argument that despite a lack of physical evidence, text messages and pictures Gallagher took with the teen’s body are direct evidence of his guilt.

“Good story behind this one. Got him with my hunting knife,” read one of the text messages Gallagher allegedly sent to a colleague. “I got a cool story for you when I get back. I got my knife skills on.”

Prosecutors alleged that once Gallagher received word of the prisoner, who was injured in an air strike, Gallagher said, “No one touch him. He’s mine.”

He was accused of pulling out a hunting knife and stabbing the boy multiple times while he was being tended to by other SEALs. Prosecutors accused Gallagher of shooting two civilians, whose bodies were never recovered, about a month later and opening fire on a crowd of other civilians from a sniper’s nest.

Gallagher’s defense team claimed the allegations are fabrications coming from a group of disgruntled subordinates who felt their platoon commander was too tough on them.

His attorney, Timothy Parlatore, said the SEALs who reported Gallagher were lying, and he contended the government was relying entirely on their word in the face of a complete absence of physical evidence that any of the charged events ever occurred.

“No body, no forensics, no science, no evidence, no case,” Parlatore said.

The attorney emphasized that in addition to no bodies being recovered, no blood was ever seen on Gallagher or the hunting knife, despite photographs taken shortly after the stabbing allegedly happened. Without a body, a forensic expert testifying as an expert witness was unable to determine the teen’s cause of death based solely on video footage of the boy’s injuries.

In surprise testimony during the trial, First Class Petty Officer Corey Scott testified that he suffocated the wounded ISIS fighter after Gallagher stabbed the teen in the neck. Scott said he held down the boy’s breathing tube because he did not want him to suffer or be tortured by Iraqis.

But Navy prosecutors said Gallagher’s text messages, particularly the wording of “Got him with my hunting knife,” is evidence of his admission to the murder.

Parlatore argued that several SEALs posed with the ISIS fighter’s body and likened the text messages to “dark humor” that in no way proved Gallagher killed the teen.

According to Parlatore, SEAL Chief Craig Miller led the “sewing circle” campaign against Gallagher because other SEALs didn’t agree with his tactics.

The attorney said their efforts to discredit and remove Gallagher from his post began with accusations that he was stealing from care packages. When those allegations didn’t gain traction, Parlatore said the group escalated their claims bit by bit until eventually accusing Gallagher of murder.

Parlatore also accused the government of conducting a shoddy investigation that began with the foregone conclusion that Gallagher was guilty, and overlooked witnesses who might contradict that viewpoint.

Prosecutors alleged that Gallagher threatened fellow SEALs over the allegations, and posted their names in private Navy social media groups in order to out them as traitors and sabotage their chances at career advancement.

But Gallagher’s attorneys argued he was simply trying to clear his name amid the volatile claims made against him, and that divulging the names of the men spreading malicious rumors was a means of warning fellow SEALs who might serve with those men in the future.

The trial was dogged by allegations of prosecutorial misconduct, with the trial judge finding that Navy prosecutors used tracking software to spy on the defense team’s email accounts.

The judge, Capt. Aaron Rugh, removed Cmdr. Chris Czaplak from the case just before the trial was set to begin, ruling the prosecution sent emails to the defense and a Navy Times reporter that were embedded with code that would track the recipients’ email activity.

The judge also ordered that Gallagher be released from custody due to violations of his Fourth and Sixth Amendment rights and reduced the maximum possible sentence of life without parole to life with the possibility of parole..

Rep. Duncan Hunter, the Marine veteran who recently said he also had posed with a dead enemy body, reacted to the verdict with a lengthy statement.

“The Gallagher case has been shameful from the start and, while much damage has been done, I am confident that Chief Gallagher, Andrea, their children and the entire family has the fortitude and determination to rebuild their lives and move on to the next chapter,” he said in a statement.

“That being said, the fact that this situation would happen to an American hero is nothing short of a disgrace for the entire military justice system.”

The Alpine Republican facing his own legal jeopardy continued: “On very circumstantial and limited physical evidence, the Navy felt it appropriate to charge Chief Gallagher with the murder of an ISIS terrorist, accomplishing nothing but destroying the military career of a decorated Navy SEAL and giving every warfighter cause for concern that the nation they serve does not have their back.

“Let’s review how the Navy prosecution has conducted themselves in this situation. When Chief Gallagher was arrested, his children were pulled from their home in their underwear at gunpoint. Gallagher was placed in solitary confinement and then in a general population with pedophiles and other sexual offenders before being formally charged. He was provided very limited access to his attorney, family and medical treatment for seven months and it literally took an act of the President of the United States to place him in an appropriate confinement environment.

“Even after the shocking admission on the stand by a witness that it was he who killed the ISIS fighter and not Chief Gallagher, the Navy prosecution still moved forward with this unnecessary trial. The Navy’s actions in this case are shameful, detrimental to good order and adversely affects the morale of our warfighters.

“This not guilty verdict was more than warranted. While this case is now closed, the Navy will still be held accountable for their actions in this matter and I fully intend to continue working to protect America’s warfighters against a military justice system that is more focused on career advancement and sensational headlines as opposed to implementing and exercising the rule of law.”