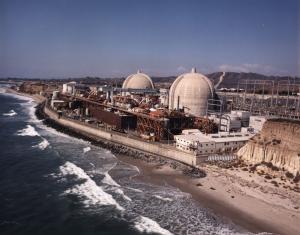 September 26, 2015 (San Diego) – An investigation by KNSD-TV Channel 7 , the NBC affiliate in San Diego, has dropped a bombshell regarding efforts to cover-up lax handling of nuclear waste and radiation leaks at the San Onofre Nuclear Generating Stations.   Get the full report and the confidential documents here.

Hundreds of pieces of contaminated radioactive equipment were stored on both sides of Interstate 5, which bisects the San Onofre nuclear waste dump now under construction following shut-down of the facilities.  Some were openly exposed to weather.

The NBC investigation also shared concerns of overly cozy relationship between inspectors and Edison, as well as secret talks involving Edison, SDG&E, and stakeholders including the Navy and Marines. Some have reportedly been pressured to sign non-disclosure agreements to prevent negative information from being made public, though a Navy spokesperson told  NBC that the Navy has not signed a non-disclosure agreement.

Edison advised NBC that it has shared info with the public on its lease with the Navy for the property and briefed a San Onofre Community Engagement Panel multiple times on this topic in the last 18 months.

NBC reported that SDG&E did not respond to its requests for comments, nor did the Marines.

Charles Langley is a former public advocate at the Utility Consumers’ Action Network who was terminated for being a whistleblower reporting off-the-books investments he likened to money-laundering.

“My chief concern is the corruption and lax regulatory enforcement at CPUC (California Public Utilties Commission) which has resulted in failure at San Onofre, the unnecessary construction of the Sunrise PowerLink, unnecessary deaths at San Bruno (where a PG&E pipeline exploded) and some of the highest electric rates in the nation,” he told East County Magazine.

Langley adds, “I am extremely troubled by the corrupting influence of intervenor compensation  at CPUC, which in my opinion, has been used as a form of payola to reward  consumer groups that endorse and support unconscionable rate increases. I believe that the secretly-negotiated settlement with Edison at San Onofre by TURN, The Utility Reform Network, is perhaps the most egregious example

of corruption through intevernor compensation. “

Due to secrecy shrouding the San Onofre high nuclear readings that kept an NRC inspector from entering the building and led to covering the roof in lead sheeting after employees were exposed to radiation levels, Langley observes, “We still don’t know how high those radiation levels were. And if Edison gets its way, we will never know.”

Langley echoed Arora’s call for an independent inspection by an entity other than the NRC, concluding, “The answer is probably worse than we think.”