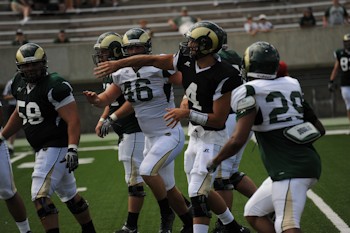 August 26, 2010 (La Mesa) - The 2009 football season was one of unprecedented achievement for the Norsemen of Valhalla High School. For the first time in the school's 35 year history, the team won a league title. Unfortunately the season did not end on a high note as the Norsemen suffered a disappointing 24-20 loss to Helix High School in the quarterfinals of the CIF playoffs.

One of the major contributors to the team's success in 2009, quarterback Pete Thomas, had previously committed to attend Arizona State University. After some changes in offensive philosophy at ASU, Thomas decided to go to Colorado State University instead.

Thomas earned enough credits to graduate mid-year from Valhalla and started attending classes last spring at CSU. After he participated in spring practice and performed well in training camp this summer, CSU coach Steve Fairchild announced that Thomas would be his starting quarterback for the Rams' 2010 season opener against the University of Colorado.

Thomas, who is majoring in communications with a minor in criminal justice, took a few minutes out of his busy schedule to talk about last season and playing college football at CSU: 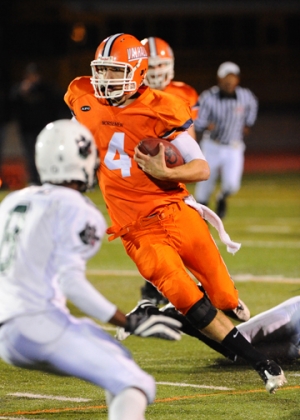 East County Magazine: A year ago, it looked like you were headed for Arizona State. What were the circumstances that led to you changing to Colorado State instead?

Pete Thomas: I was committed to Arizona State for awhile, I really liked it there, the coaches were really good, but then they decided to switch offenses, to the spread offense and I wasn't really looking for that.

So I decided to go to Colorado State and couldn't be happier with my decision. It's a great place, great coaches, great football program, great community up here in Fort Collins.

ECM: Is the offense there similar to what you had at Valhalla?

PT: At Valhalla we were more of a spread offense; here it's strictly pro style offense. Coach Fairchild was in the NFL for awhile; it's all pro style here and I really like it.

ECM: You left mid-year to go to Fort Collins. That had to be a big adjustment. What was that like for you?

PT: It was a big change, but honestly I did not have enough time to really think about it. One Friday I was still going to Valhalla, then the next Monday I was at Colorado State taking classes.

ECM: Going back to last season, the Norsemen had accomplished something that a lot of Valhalla teams had not accomplished. You won league, but obviously the playoff loss to Helix had to be disappointing. Did you any your teammates get to a point where you could get past the disappointment and enjoy what you accomplished?

PT: Definitely. Obviously we were really disappointed in the loss to Helix. We weren't expecting it; we knew they were a really good team, but I thought we were well prepared.

Definitely we were disappointed, but I think time heals everything. When the banquet rolled around in January, we were all excited that we had won league and we were the first team to do that.

We had a really good record and the year before we got to play in [Qualcomm Stadium]. So I think that team accomplished a lot, even though we lost to Helix in the quarterfinals. There's still a sense of accomplishment after the season.

ECM: What was your favorite game from that season?

PT: I would say the West Hills game was probably the funnest; playing against [Valhalla head coach] Sutton's old team and beating them pretty good and also the Steele Canyon game. I did not play too great myself, but that was the game that clinched league for us and Steele Canyon's our biggest rival.

PT: The freshman year when we were picking numbers for JV they asked, 'What number do you want to be?' and on the spot I chose number four and that's what stuck with me.

ECM: Where do you stand on the Rams depth chart? 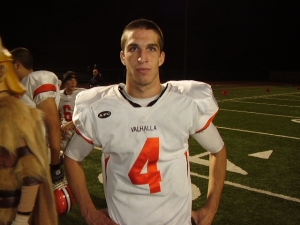 PT: Actually on Tuesday (8/17), I was named the starter for the opening game against [the University of Colorado] at Invesco Field, so I was really excited about that.

ECM: What's a typical day like in the life of a college quarterback?

PT: I've never been here for a season, but you wake up early in the morning, go lift, go to class, then you have about two, two and a half hours of meetings, then practice, then you watch the film of that practice afterwards, then you're done.

So it's a pretty busy day, especially if you are taking some hard classes. There really is no down time in the life of a student athlete.

ECM: The Rams play San Diego State in November. Does that game have any special meaning to you, or is it just like any other game to you?

ECM: Who is the biggest rival on the Rams' schedule?

Even though I've never been here and played those teams, I know about the rivalries from watching TV and hearing from other guys.

ECM: Wyoming is about what? An hour away or so?

ECM: What are your personal goals this year? Obviously you have reached one of them in that you were named the starter, but at the end of the season, what would you like to be able to say that you accomplished?

PT: My goals for this year are all team-oriented. We want to make it to a bowl game, be able to compete for a conference championship, get this program back on track and headed in the right direction, and I'm confident with coach Fairchild leading us that we can.

Christopher Mohr is a freelance writer in the San Diego area and is a huge fan of the Padres, Chargers and Detroit Red Wings.