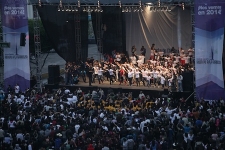 October 21, 2012 (Tijuana)--Tijuana Innovadora ended with a joyous celebration Sunday night that had thousands dancing in the city's streets.

“This conference showed, particularly to our young people, that they can do it!,” exclaimed the event´s co-founder and president, José Galicot hours before the event ended. “Sí se puede!”

A total of 918,446 attended the 11-day conference, according to preliminary figures released Sunday. That's up 32 per cent from the inaugural conference in 2010, which lasted 15 days, the organizers noted.

Organizers reached out to leaders in key sectors across San Diego County for several months, highlighting Tijuana´s innovation and inviting them to attend the conference.  A total of 1,386 accepted, arriving in a special bus, touring the exhibits, attending keynote addresses and panel discussions and attending receptions. 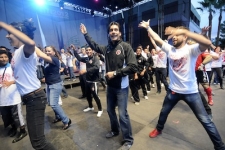 Organizers offered several new components this year, including a Culinary Battle and InnovaModa fashion show.  Also new were the 74 workshops, which were attended by 14,800 people, and a variety of cultural events attended by 24,590 at the conference venue, Centro Cultural Tijuana.

As for the speakers, they stressed that the most important component for Tijuana to reach its potential as a world-class city was citizen engagement, not private companies or governments, which change frequently.

The citizen participation was evident Sunday evening, when thousands danced simultaneously at the cultural center to celebrate their affection for Tijuana. The event, known as Pa´ Bailar, was followed by a huge outdoor concert by the popular Tijuana-based electronic group Nortec Bostich + Fussible.

At an informal press conference Sunday afternoon, Galicot was asked what were the lessons of Tijuana Innovadora. 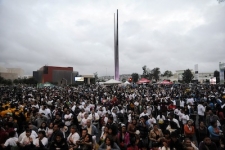 It´s a message aimed particularly at young people, he said. In fact, a total of 198,561 students visited the conference, from elementary schools to universities.

“We have planted in them a tiny seed of what's possible.”