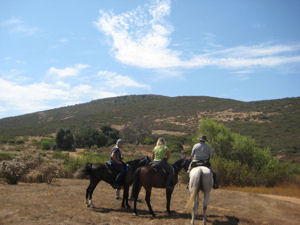 Acquisition augments San Diego National Wildlife Refuge
July 16, 2012 (East San Diego County) -- With the assistance of The Nature Conservancy, SANDAG and the U.S. Department of the Interior have bought a 1,905-acre property in East San Diego County for open space preservation and the protection of endangered and threatened species, including the Quino checkerspot butterfly and California gnatcatcher.
The acquisition of the Hidden Valley site in the Jamul area was announced today at a community celebration onsite. Dignitaries at the event included: Jack Dale, SANDAG First Vice Chair and Santee Councilmember; Wendy Pulling, California Director of Conservation Programs for The Nature Conservancy;  Rowan Gould, Deputy Director of Operations for the U.S. Fish and Wildlife Service (which falls under the U.S. Department of the Interior); and Laurie Berman, Caltrans District 11 Director.
“The sheer size and strategic location of the Hidden Valley property makes it another crown jewel in our TransNet Environmental Mitigation Program,” Dale said. “Since starting the program in 2008, less than five years ago, SANDAG has preserved more than 3,300 acres of open space and valuable habitat in the San Diego region.”
The newly-acquired land is now part of the San Diego National Wildlife Refuge, an 11,000-acre-plus block of habitat long recognized for its rich and unique biodiversity. The Hidden Valley site fills in the missing links between the National Wildlife Refuge managed by U.S. Fish and Wildlife Service and the Rancho Jamul Ecological Reserve managed by the California Department of Fish and Game. 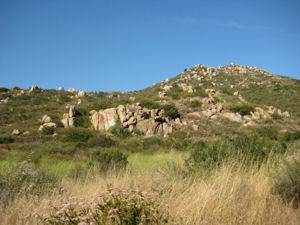 “Conserving lands like Hidden Valley not only provides the space that plants and animals need to thrive, but also guarantees citizens and the generations to follow that they will have these places to connect with nature and enjoy the benefits it provides,” Pulling said. “It’s truly an example of what private-public partnering can achieve together.”
Through the TransNet Environmental Mitigation Program (EMP), SANDAG contributed $10 million toward the $18 million purchase price for the property and covered the cost for 953 acres of the 1,905-acre site. The Department of the Interior, with funding provided by the U.S. Department of Homeland Security, paid the balance. The Nature Conservancy negotiated the reduced “bargain sale” purchase price, which was $2 million lower than the market value estimate of $20 million as determined in an appraisal obtained by the Conservancy and U.S. Fish and Wildlife Service. The seller, Hidden Valley Development, LLC, may claim a charitable gift for tax purposes as part of the transaction. Escrow for the sale closed at the end of June.
TransNet – a regional half-cent sales tax for transportation approved by taxpayers countywide – sets aside $850 million over a 40-year period to buy, conserve, and restore native habitat as offsets to disturbances caused by transportation projects. The EMP allows SANDAG to comprehensively satisfy mitigation requirements by buying land in advance of projects, in larger parcels, and at lower prices. By focusing on early, large-scale, and cost-effective investments in habitat conservation, the EMP has become a model for other agencies.
The Hidden Valley acquisition helps SANDAG and Caltrans meet environmental mitigation requirements for scores of regional transportation improvements planned countywide, including: SR 54/SR 125 between I-5 and SR 94; SR 94/SR 125  between I-5 and I-8; I-5 between SR 905 and
SR 54; I-8 between SR 125 and Los Coches Road; I-15 between SR 94 and SR 163; I-15/SR 94 HOV connectors; SR 52 between I-5 and I-805; SR 94 between Avocado Boulevard and Steele Canyon Road; SR 125 between SR 905 and San Miguel Road; as well as small regional projects and local roads and streets.
Had SANDAG purchased land piecemeal to meet the mitigation requirements for these projects, it would have cost an estimated $58 million. By teaming up with the Department of the Interior to jointly purchase the Hidden Valley property, SANDAG saved taxpayers an estimated $48 million.
Situated on the northeast flank of Mount San Miguel, the Hidden Valley property is at the heart of the Otay-Sweetwater Unit of the San Diego National Wildlife Refuge, considered the largest block of intact habitat in coastal San Diego County. The newly-acquired land combines with thousands of acres of open space nearby to create continuous wildlife corridors critical to the survival of endangered and threatened species.
“Acquiring this land helps accomplish the goals of not only the U.S. Fish and Wildlife Service, but also the goals of the suite of agencies and organizations working together under the San Diego Multiple Species Conservation Program to preserve the exceptional biodiversity of San Diego,”  Gould said.
According to The Nature Conservancy, federal, state, and local partners – including U.S. Fish and Wildlife Service, Bureau of Land Management, County of San Diego, City of San Diego, SANDAG, and the Conservancy – have to date collectively invested more than $150 million in and around the National Wildlife Refuge in support of the Multiple Species Conservation Program.

I would suggest that anyone, government or private party, who turns land over to the federal government for open space put in writing that it must never be used for energy development and that if any such proposal is put forward, the land will revert back to the original owner.

That said, I asked about this particular parcel, and a county official checked and told me it is protected from energy development. I hope that she's correct.

I hope she is too, Miriam. Thanks for looking into this!