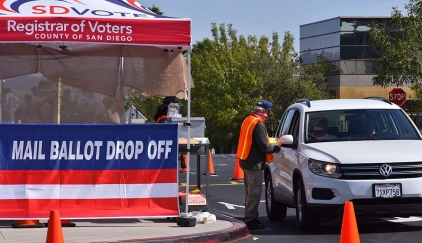 Photo:  Voters drop off a mail-in ballot at the San Diego Registrar of Voters office in Kearny Mesa. Photo by Chris Stone

October 30, 2020 (San Diego) - In an early-voting surge seen across the country, nearly half of San Diego County’s 1.95 million voters have cast their ballots in the Nov. 3 election, the Registrar of Voters reported Thursday.

That’s more than double the number received by this point in 2016.

More than 937,000 ballots had been received as of Thursday, according to the registrar’s office — over 48% of the total to be cast. At this point in the 2016 presidential election, the registrar had received 409,700 ballots.

Other parts of the country are seeing similar levels of turnout. In Texas, 51% of registered voters had cast their ballots by Wednesday, with long lines at many polling places. In Florida, 52.5% of ballots were in as of Thursday. In Georgia, it was 48.9%.

More than 80 million Americans have now cast ballots in the presidential election, according to the U.S. Elections Project at the University of Florida. Professor Michael McDonald, who directs the project, is predicting a record election turnout.

McDonald and other voting experts have predicted turnout will easily surpass the 138 million who voted in the 2016 presidential election. Only 47 million votes came before Election Day in 2016.

California and many other states, including Texas and Florida, can count ballots before election day, leading to earlier results.

Ballots received by the San Diego County Registrar of Voters office this week should be processed in time for the first release of election night results to be posted shortly after 8 p.m. on Tuesday.

“We encourage voters to act early and make voting decisions from the comfort and safety of their home,” Registrar of Voters Michael Vu said. “Mark your ballot, sign, seal and return your mail ballot to a trusted source. The sooner we receive your ballot, the sooner we can start processing it so it will be counted right when the polls close at 8 p.m. on Nov. 3.”

All San Diego County voters received official ballots by mail earlier this month and have a number of voting options:

Due to the COVID-19 pandemic, the registrar’s office encourages older adults and people with underlying medical conditions to avoid long lines and crowded polling places by voting early.