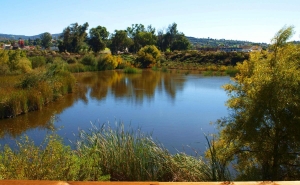 San Diego, CA, (December 15, 2010) – KRC Rock, a San Diego natural stone and boulder provider, has partnered with the Lakeside’s River Park Conservancy to help them in their mission to preserve and restore the biological integrity and beauty of the San Diego River.

“We are very proud to be an integral part of the Lakeside community and to be able to help raise funds to restore such a naturally beautiful area,” says KRC Rock Lakeside Store Manager, June Kelly. “River Park supporters now have the option to help beautify a part of our precious environment while beautifying their home.”

Founded in 2001, the Lakeside’s River Park Conservancy is a non-profit 501 (c) 3 organization and an important segment of a larger vision for a 52-mile River-long park development effort by the San Diego River Conservancy and San Diego River Park Foundation, which will extend from the mountains in Julian to the Pacific Ocean.

Founded 1984, KRC Rock, is a natural stone, boulder, and masonry materials dealer with three San Diego County locations. KRC Rock offers on-site boulder delivery and placement, as well as, one of the largest selections of natural stone from around the country.