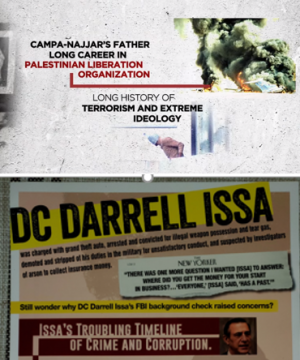 October 13, 2020 (San Diego’s East County) – As voters begin casting ballots in the 50th Congressional district, last-minute mailers and online ads for Democrat Ammar Campa-Najjar and Republican Darrell Issa have gone negative, each tarring the other as unfit for public office with allegations ranging from terrorist ties to criminal actions.

One campaign sent a mailer displaying ECM’s logo without permission; ECM does not endorse candidates and prohibits use of our logo for political purposes.

Both Issa and Campa-Najjar also recently appeared in video interviews with Defend East County. Campa-Najjar drew sharp criticism from progressives and people of color for meeting with what some has characterized as a racist vigilante group, even as Issa denounced Black Lives Matter for “doing damage” to African Americans and referenced “criminal elements” in BLM and Antifa during his video discussion with DEC's leader.

Issa has also tried to tie Campa-Najjar to terrorism in an ad that claimed Campa-Najjar’s father long had involvement with the Palestine Liberation Organization) PLO. According to a San Diego Union-Tribune article, Yassir Najjar, the candidate’s father, “publicly advocated for peace” unlike the candidate’s more militant grandfather. Ammar Campa-Najjar was born in the U.S. and has indicated that his father left the family when Ammar was a child; his grandfather died before he was born. He was raised by his mother, a Catholic.

However Issa also faults Campa-Najjar for his involvement in a peace in Palestine video that Issa’s characterized as “anti-Israeli.” Campa Najjar has publicly touted a two-state solution to the Israeli-Palestine conflict and his endorsements include some local rabbis.

Campa-Najjar’s latest mailer has this headline: “Issa’s troubling timeline of crime and corruption.” It references charges of car theft in the ‘70s and ‘80s, a military demotion and more.  On the reverse side, ECM’s logo appears (unauthorized) on the top above a partial quote from a 2019 ECM article that quoted Republican and Democratic Senators who declined to approve Issa’s appointment by President Donald Trump to a trade commission because of concerns over undisclosed content of an FBI background check.

On Facebook, Campa-Najjar wrote, “Ethics matter, especially after losing a congressman in #CA50 to crime,” a reference to ex-Congressman Duncan D. Hunter, who resigned in disgrace after pleading guilty to diverting a quarter million dollars of campaign donations to personal use.

Campa-Najjar has also criticized Issa for accepting COVID-relief under the PPP program for his business, then loaning his campaign the same amount within three weeks.

Asked about this by ECM, Issa called the claim “”despicable.”  Issa said he has periodically loaned or given money to his campaign.  He said his real estate company was able to retain its six employees, fully pay its rent and avoid layoffs with the loan, for which he did not ask forgiveness.  “We’re going to lose much more than that $150,000,” he said of the business impacted by COVID-19. He indicated that he also authorized applying for the PPP loan to “see what the process was like” and whether it was as quick and easy as intended.

Both Campa-Najjar and Issa recently participated in videotaped candidate discussions with a leader of Defend East County, a group started after the La Mesa riot ostensibly to protect businesses, but numerous local people of color have reported receiving threats, racial taunts or violent attacks instigated by some DEC members and racist groups that showed up to stand against protesters alongside the DEC.

“It was disappointing,” Chair of the San Diego County Democratic Party Will Rodriguez-Kennedy told NBC 7 in an interview. .”We reach out to non-party preference, we reach out to Republicans. But to reach out to white supremacists is the line that we draw in the sand,” said the Democratic chair.

Campa Najjar latter posted an apology on Facebook for the meeting. “Despite my best intentions, I messed up,” he wrote on Oct. 11. He claimed he was unaware of the threats of allegation of violence at the time of his interview and also stated, "I denounce white supremacy."

The Democratic nominee also drew criticism from party members for saying he hadn’t yet made up his mind who to support for President in the contentious race between President Donald Trump and Joe Biden, who served as Vice President to Barack Obama at the time Campa-Najjar served in the U.S. Labor Department during the Obama administration.  However today Campa-Najjar announced his endorsement of Biden.

Campa Najjar has also criticized Issa for not living in the 50th Congressional District, touting his own East County ties. Issa counters that the district he formerly represented largely overlapped the 50th, though primarily in the northeast portions.

“Am I going to pay attention to East County? That’s my job,” Issa told ECM. “It’s also my job to pay attention to Marines at Miramar even though it’s not in my district,” he added, noting that he’s also worked on border issues with Democratic Congressman Juan Vargas even though the 50th district doesn’t touch the border. “Duncan Hunter Senior would have been the first to say as federal officers, we have obligations beyond our district lines.”

Another criticism against Issa has been leveled not only by Campa-Najjar, but several ethics watchdog groups.  “Darrell Issa just broke FEC law, compromising the County Republican Party in the process,” Campa Najjar tweeted, referring to an invitation from Issa to support East County conservative candidates at a Lakeside fundraising event. End Citizens United has filed a complaint with the Federal Elections Commission alleging that the action violated campaign finance laws.

The Issa campaign has denied wrongdoing, but did change the language regarding the event on its social media posts.

Unfortunate mud slinging has gone on on both sides. I worked for Ammar's 2018 election bid. Unfortunately, illness has left me unable to work this year. I've been listening to him for four years. I like what he has had to say. Mud-slinging at the 11th hour is common for Republicans. I've never heard it from him before. Issa is running because there was a place to run since Duncan Hunter had been convicted of fraud and left this district high and dry without any representation in Congress. Does he even live in this district? Do you think he's concerned about the residents of any of the 50th? Or do you just not care whether we have someone in Congress willing to fight for what we want? I know Ammar will. Republicans are voting for Issa just to get another Republican in office. They could care less about us. If you care about this district, elect someone who lives here and cares about us...Ammar Campa-Najjar.