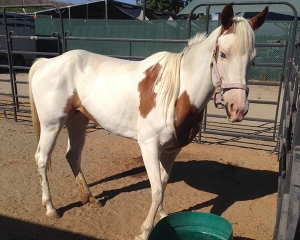 One severely malnourished horse was seized on Thursday night as the officer believed that very prompt action was necessary to try to save it. After discussions with the equine veterinarian who observed the horse last night, the decision was made to euthanize the horse Friday as its condition continued to worsen.

The remaining three horses were being kept in unsanitary conditions, and they were rescued Friday afternoon. A veterinarian is examining them thoroughly for medical issues, but all three were observed to have hoof problems and may be pregnant.

“The owner lives in Minnesota and had left a caretaker in charge of the horses,” said County Animal Services Director Dawn Danielson. “The case is now under investigation but we may pursue charges against the caretaker, the owner or both.”

The owner has 14 days to reclaim his horses if he shows he can provide the necessary care and if he can pay the cost of their impoundment, housing and medical care.

If the owner does not try to reclaim the horses, or cannot show he can provide the necessary care, the animals will remain at the Animal Services care facility in Bonita until they are healthy enough to be adopted.