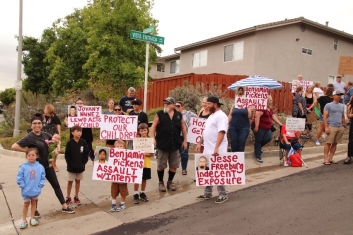 September 12, 2022 (Lakeside) -  Families, neighbors and their supporters gathered in Lakeside on Blossom Valley Road to protest five sex offenders secretly placed in their neighborhood in the past couple of weeks.

In a story that happens all too frequently in East County, approximately 100 residents and community members expressed their surprise, fear and outrage at finding out that their quiet, family-friendly community was housing convicted sex offenders. Not one, or two, but five – all in one home.

Moved In Without Notice or Warning

“We’re out here protesting because in this tiny little community of 18 homes we have 21 children under 16 and under and, out of nowhere, we woke up to find out that 5 sex offenders got moved in the last 2 weeks,” said Erica Rosser, a local resident and co-organizer of the community response to the placement of sex offenders in her small, tight-knit neighborhood.

Erica’s husband, Paul Rosser, is Vice President of the homeowners’ association (HOA).  “Me and my friends who are on the Board had no idea this was happening,” he said. “They moved-in and we weren’t notified. We found out on Tuesday. The President of the Board contacted the Board and told us that she logged onto Megan’s Law (the state’s registry of sex offenders) and searched her addressed and noticed that they [the sex offenders] live here.”

The people who showed up to express their concerns ranged from under 10  to over 70 years old. 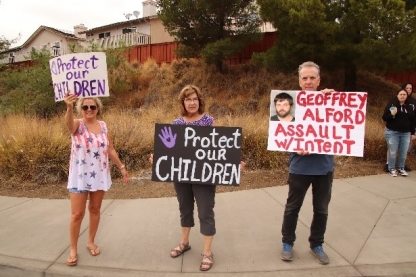 “A few weeks ago, my son came to me very concerned about what’s going on in his community,” said Becky, who asked to not list her last name. “My son is a firefighter for San Diego and I’ve never seen him that heavy hearted.”

“Being a grandmother of four kids it broke my heart,” continued Becky. “I cried. I can’t even sleep. I go to bed thinking of a mother, like Megan’s Law, or Chelsea’s Law. This needs to get done before we get to those titles.”

Megan's Law is named after 7-year-old Megan Kanka, a New Jersey girl who was raped and killed by a known registered sex offender who had moved across the street from the family without their knowledge. 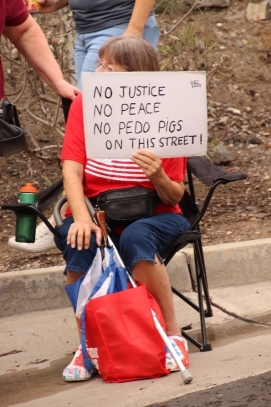 Chelsea’s Law was named after Chelsea King, a 17-year-old Poway High School student who, on February 25, 2010, disappeared after going for a run in a community park. Law enforcement and thousands of volunteers searched until they finally found her body in a shallow grave just off the trail she was running on, by Lake Hodges. Chelsea was the victim of a horrific crime committed by a convicted sex offender who later confessed and plead guilty to taking Chelsea’s life, as well as killing Amber DuBois, an Escondido missing teen.

Becky’s grandchildren live only five houses from the address where the sex offenders are located.

“There must be 18 kids who live up there and they all must be under the age of 10, maybe 12, and they all play out in the street,” said Becky. “I look at the little faces of my grandkids and I thought, what must Megan’s mother feel like after she found out about her daughter? I just don’t want that to happen to us. Or anyone for that matter.”

“I have two daughters, 11 and 5, and it is not OK what’s going on,” said Tiffany Nothwang, who lives in the community. “I understand that people need rehabilitation, however, I don’t know how productive it would be to [place them in] a family setting where there are so many houses close together to these repeat offenders. It’s like sitting an alcoholic on top of a bar. It’s like dangling a carrot in front of them.”

She added, “I homeschool them and we enjoy our walks and our times out, and now I’m in fear of that.”

Tiffany asks, “Why are we not questioning, as a community, why these offenders have so much more rights than families and children? Our children’s lives matter.”

One of the homeowners, a mother who asked to use the pseudonym Marie, shared that when her daughters were younger, “Every year we sold over 1,000 boxes of Girl Scout cookies, and we came right down this street.”  She said she used to feel safe in the neighborhood letting her girls go out, but “now I ‘m very worried.”

She noted, “The house next door to the house where the sex offenders live has a pool. How would you feel living next to them and having them looking down from their second story windows into your backyard and onto your pool with your kids and their friends playing out there?” 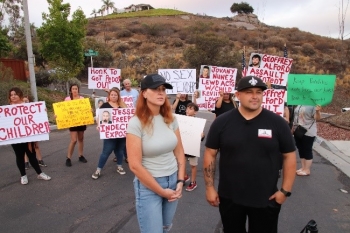 She objects to the owner profiting off the home with taxpayer dollars. She also voiced concern over the revolving door potential.

Rossner said already, one offender has been moved out and replaced with another.

“The one that came in is a sexual pedophile whose conviction was with someone 14 or under,” he said.

Who Owns the Property?

I asked Erica Rosser if they know who owns the house. She responded, “We do, but we don’t. I found the owners on the internet and tried to contact them through all three of their social media accounts…We believe she’s a realtor…if you Google her address and the owner of the company of the purchase’s place, it links to the same house. But she’s claiming to just be the manager of the property. Now I’m blocked on all her social media and we think she’s deleted all her accounts.”

“What we have gotten through the HOA is that it was refinanced and they removed the old owner off the title and listed Mountain High Construction LLC, and it’s being managed by a realtor named Cristine Casi,” shared Rosser. ”Her real first name is Nichole. We tried to contact her.” After asking whether the  LLC  is owned by a family member of Casi’s, Rosser says, “She blocked me. She won’t answer our calls.” 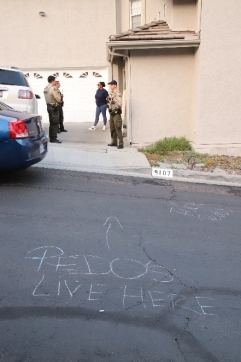 A screenshot of Christine Casi’s (Nichole) Facebook page lists her as a Real Estate Agent with Coldwell Banker Well. That Facebook page is no longer active. Documentation of the LLC, which is registered in Wyoming, lists Nichole Casillas as the manager.

“Who’s Going to Watch My Family?”

Ironically, Rosser recalls, “A few months back we did have a fire at [County Supervisor] Nathan Fletcher’s house. I was there for his family, and I hope he can be there to support my family.”

The president of the HOA where the sex offenders’ home is located works for the Grossmont Union School District and reached out to the Cajon Valley School District to explain the situation, and shared that elementary school children would need to walk past the home where the sex offenders live to reach the school bus pickup, and asked them what they could do to help?

The Cajon Valley Union School District representatives in turn, contacted the parents of the young children who needed assistance, and shared that “we’ve had this situation before. We’re hear to help you and here to support you until we figure it out.”

The Cajon Valley Union School District suggested sending out a special commuter van to pick up the three elementary school children at their homes who would otherwise have to walk by the sex offenders’ house to get picked up at the established bus route down the street.

Erica Rosser, a parent of two of the young children said that the Cajon Valley Union School District has been wonderful and very understanding, compassionate, responsive and supportive, and when they called her to talk about the situation, said “don’t worry about it for now, we’re hear to help.” Rosser wanted to make sure that the Cajon Valley Union School District received the recognition and appreciation they deserve for their immediate response and support to the families affected by this situation.

Although Rosser was understandably very relieved and grateful, she also lamented that “here’s another way this situation is affecting our tax dollars.”

She emphasized the importance of community members getting involved.  “We need to make noise…hey slipped in here under a refinance and we don’t know how they got away with it, but we’re doing everything we can/ We’re no longer the ones protected. The offenders are,” lamented Rosser, sharing a frustration shared by many of those in attendance.

The community has started both a Facebook page and an Instagram account. If you would like to support the Blossom Valley Road community to fight the placement of sex offenders in their community, you can login and participate in their social media accounts:

The community is hosting another protest on Monday, September 12, at 6:00 pm at the intersection of Blossom Valley Road and Vista Entrada. They plan to continue their protests every day until the sex offenders are removed from their community.

According to the Shouse California Law Group website, the following restrictions are imposed upon sex offenders in California:

In 2006, California voters passed Proposition 83 – more commonly known as Jessica’s Law – which created “predator-free zones.” Jessica’s Law prohibited registered sex offenders in California from living within 2,000 feet of any public or private school or any park where children regularly gathered. For certain high-risk offenders, the required distance is increased to 2,640 feet. Residents say there is a community park only several houses away from where the sex offenders live.

Megan’s Law was enacted in 1996. The law mandates the California DOJ to notify the public about certain registered sex offenders. The DOJ does this via the “Megan’s Law website.” 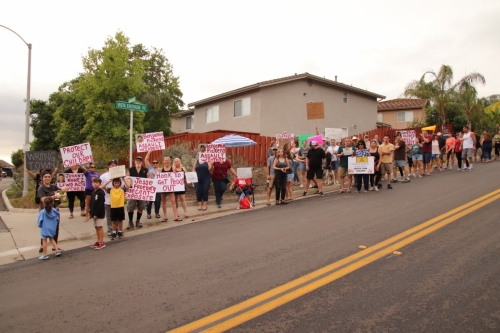 The interpretation of this provision of Megan’s Law is confusing because the Law mandates that the CA Department of Justice notify the public, but it seems they DOJ meets this mandate by simply providing a website where the public can search for information. The passive provision of a website does not seem to meet a reasonable understanding of “informing the public,” which seems to imply a proactive action to inform, not make available.

There are five sex offenders living in the house in Blossom Valley.

The Shouse California Law Group website on California Sex Offender Residency Restrictions can be found at:

From the State of California’s Department of Justice Megan’s Law website:

California's Megan's Law was enacted in 1996 Penal Code § 290.46. It mandates the California Department of Justice (CA DOJ) to notify the public about specified registered sex offenders. Megan’s Law also authorizes local law enforcement agencies to notify the public about sex offender registrants found to be posing a risk to public safety. Megan's Law is named after seven-year-old Megan Kanka, who was raped and killed by a known child molester who had moved across the street from the family without their knowledge. In the wake of that tragedy, the Kankas sought to have local communities warned about sex offenders in the area. All states in the U.S. now have some form of Megan's Law.

The California Sex and Arson Registry is the source of sex offender information displayed on this website. This database contains registration information provided by the offender to local law enforcement agencies. This website indicates that some of the registrants are currently in violation of their registration requirements. Any information you may have on these individuals should be reported to your local law enforcement agency.

You are supposed to be able to search your address on the CA Department of Justice’s Megan’s Law website to see if there are any registered sex offenders living near your home. But despite multiple attempts and trying all I could think of trying, I could never get this site to work. The website is https://www.meganslaw.ca.gov/About.aspx.

The site that does work is https://www.meganslaw.ca.gov/Disclaimer.aspx.