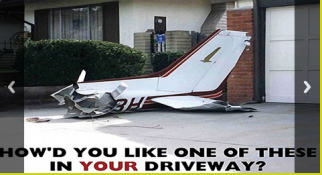 June 15, 2015 (El Cajon)—Dozens of families are close to filing a lawsuit over the increased air traffic at Gillespie Field airport, where more expansion is planned. But with a June 30th deadline to finalize paperwork with a class action lawyer, another two dozen residents are needed to join the suit by the deadline.

A meeting is set for Tuesday, June 23rd at 6:30 p.m. with the lead attorney and interested residents. The meeting will be held at a private residence in Fletcher Hills. To RSVP and get the address and directions, contact info@asapgillespiefield.com.

“This is our last chance to get something done,” says Sue Strom with Advocates for Safe Airport Policies ASAP.

Residents have complained about a recent increase in flight schools and potential hazards ranging from lead pollution to crashes over residential neighborhoods.  Several mishaps have already occurred, including one small plane that crashed onto the driveway of a home.

Gillespie Field, which straddles the borders of El Cajon, Santee and unincorporated San Diego County, is now defined by the FAA as a national airport.  That means funds are expected for the expansion of runways and an increase in flight schools to serve the international demand for more pilots.

“We have a training pattern running through the heart of our neighborhoods,” Strom says. “And that training pattern will become even busier than it is unless we take a stand for our community now.  We are already sitting under 140 to 190 touch and go operations every single day.”

The County has disputed claims such as low-flying aircraft over homes, health and safety risks. But  residents have had noise and real estate experts out to their neighborhoods  in the past several months who have documented the situation.

Strom states, “We have been able to retain top attorneys who are from the East County and who have dealt with flight schools.”

The June 23rd meeting will provide an opportunity for residents to get questions answered and help get a class action lawsuit filed to take action.