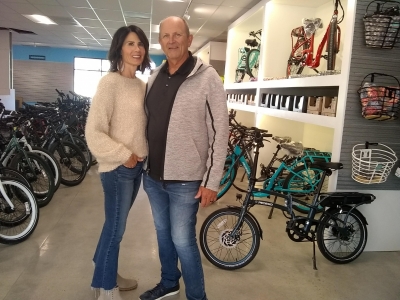 But what he’s even more excited about is turning people on to the joys of riding e-bikes.

“I wasn’t looking to get into this business. It sort of found me,” says the tall, former Santee resident who now calls Blossom Valley home.

Last year, Carter and his wife, Stephanie, were in the market for some electric bikes, did their research, and decided to buy a couple of Pedegos from a San Diego dealer. Their experience was similar to what other owners of e-bikes have: the more they ride, the more they want to ride, and tell others it’s a great form of exercise.

Carter, a recent retiree after selling his Fix Auto repair shop on Cuyamaca Street (the building with the digital temperature gauge), said after about six months of doing some home repairs and traveling, he was “feeling irrelevant.”

“I had built up this successful business with 99 employees and nice revenues, and I was fully engaged in that business, and involved in a lot of my employees’ lives. And then it suddenly ended,” he said. “I needed something to do.”

Last August, after considerable due diligence, Carter acquired the rights to be a Pedego dealer, and found the right spot at 50 Town Center Parkway, just across from Costco. His dealership is the company’s 140th, and the fourth in the county. 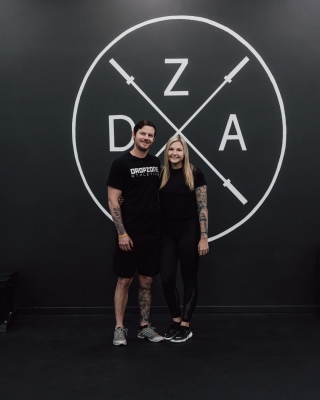 This week workers were making finishing improvements to the space formerly occupied by Pups & Pets, which closed last year after being cited by the San Diego Humane Society for violating state codes covering pet store operations.

“We’re getting there. We plan to open within the next two weeks,” Carter said Feb. 9. “This isn’t just a retail shop. We’re going to have bikes to rent, we’ll have a coffee bar here. We want to create a community for bicyclists.”

The rental business will likely lead to bike sales because many folks have never ridden a motor-powered bicycle before and need to try it before buying one, he said.

But once they do, they’re usually hooked, says Carter. “It sounds like a cliche, but if people ride them, these bikes really sell themselves.”

The biggest kick about riding an e-bike is not having to expend much energy, and have more time to look around, this writer and recreational bicyclist found. You can pedal, but depending on the gear you’re in and level of power assist you select, you’re gliding along with minimal effort.

And if you so desire, you can use the throttle for even greater power without hardly pedaling at all. But be careful going around corners. Carter says it’s similar to riding a motorcycle--you have to throttle down when making a turn.

After trying three models, the best for me was the City Commuter. But the other two, the Interceptor and Comfort Cruiser, were also fun to ride; they just didn’t fit as well

Pedego Santee will initially carry some 70-100 bikes in a variety of styles and sizes. The prices for the bikes range from about $1,600 for a cruiser to about $7,000 for tricked-out mountain bike called the Elevate.

All bikes come with a five-year warranty, which includes theft protection. Carter says he’ll also sell ‘pre-loved’ or used e-bikes, ranging from about $900 to $1,500. Service and maintenance is a regular part of the ownership, he said.

Based in Fountain Valley, Pedego was launched in 2008, and has become one of the largest sellers of e-bikes nationally. The company’s unofficial spokesman is Captain Kirk from Star Trek, William Shatner, and Pedego counts Martha Stewart as a fan too.

For newbies, Greg advises trying out several bikes before making a selection. “Don’t buy a bike until you get the right fit,” he says. “This is a deal for where we want you to become a customer for life.”

Not that far from Pedego, in the Food 4 Less shopping center off Cuyamaca Street, is another new business that is gaining traction despite the pandemic restrictions, Drop Zone Athletics.

“I’ve been chasing this dream of owning my own business for 10 years, and we’ve been open since January,” said Micah Ninteman, who co-owns the business with his wife, Nicki, who owns a tattoo shop in El Cajon. “So far we’ve doubled our client base from 17 to 34 as of Feb. 1.”

The relatively cozy gym formerly occupied by Rita’s Ice Cream features a variety of exercise tools, but the key is Ninteman’s expertise in fashioning a work out strategy that is right for an individual. He’s been in the fitness training sector for about six years, and previously worked as a trainer at the McGrath YMCA in Rancho San Diego. He also has a degree in kinesiology from SDSU and is certified by the American Council on Exercise.

The classes Ninteman has arranged Monday through Friday, and on Saturday mornings revolve around timed work outs that use such devices as a bosu board and suspension trainer. There is a level for everyone, and people can move at their own pace.

Ninteman, 30, grew up in Lakeside, one of seven children, and wants to get folks to realize what a great feeling it is to work out.

“I’m more about how the body feels than how the body looks. We are all capable and beautiful in our own ways,” he said.

so many people talk about how bad California is toward business yet here is a person who had a calif business and now opens another. Good job!!!