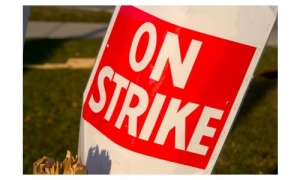 February 7, 2017 (Sacramento) -- California State Assemblywoman Lorena Gonzalez Fletcher (D-San Diego) yesterday proposed that workers who have been locked out by their employer or who go on strike against their employer should be eligible to file for unemployment insurance benefits for the duration of their work stoppage.

The Assemblywoman announced introduction of Assembly Bill 306 during the Assembly Floor debate over a resolution honoring Ronald Reagan, whose controversial firing of striking Air Traffic Controllers is viewed by labor as one of the most anti-worker events in modern history.

“To restore the necessary balance between corporations and workers who stand up to fight income inequality, we need to seek creative methods to strengthen unions,” Assemblywoman Gonzalez Fletcher said. “This is one small step in ensuring workers can exercise their right to strike.”

Under AB 306, workers locked out by their employers or workers on strike due to labor disputes would be eligible to collect unemployment insurance benefits, which range from $40 to $450 per week depending on how much an individual has contributed during their work history. To be eligible to collect unemployment because of a labor shortage, the worker must be a member of a federally recognized labor union that has authorized and called a strike or has been locked out by an employer.

In California, 15.9 percent of workers are members of a labor union.

In New York, workers who have been locked out or who have gone on strike are eligible to collect unemployment after at least 59 days, with some workers eligible to make earlier claims depending on special circumstances.

“Workers deserve dignity, fairness and respect from their employers. When they have to take on the risk of a strike to demand that, they should be able to access the modest amount of unemployment dollars they’ve been contributing to their whole lives,” said Assemblywoman Lorena Gonzalez Fletcher.

Formal opposition to the measure has not been announced, though it will likely face resistance from organizations representing employers.

AB 306 was introduced on Monday and will be eligible for consideration in committee in March.