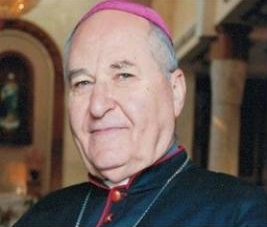 May 16, 2016 (El Cajon) – Pope Francis has named an interim replacement for the Chaldean Catholic Diocese of San Diego after the resignation of former Bishop Sarhad Jammo.  Bishop Jammo drew controversy for his efforts to prevent local priests from being sent back to Iraq, where their lives would be in danger due to ISIS attacks on clerics.

Patriarch Louis Sako had ordered the priests back to Iraq, stating in 2014, “We have to live and die in the place where God calls us.”  St. Peter’s Cathedral in El Cajon had appealed to Pope Francis, who interceded to protect the priests, keeping Father Noel here to serve his parish in El Cajon. But now the Pope’s appointment of a close ally of Patriarch Sako may put the future of local priests once again in limbo.

Bishop Shlemun Warduni, the newly appointed apostolic administrator to the Diocese of San Diego of the Chaldeans, was born in 1943 in Batnaya, a town in the Nineveh Plain in northern Iraq. He was ordained a priest in 968 and appointed bishop in 2001. For years, he served as auxiliary bishop of Baghdad, and right hand man to Cardinal Delly and his successor, Patriarch Mar Sako.

Warduni arrived in San Diego on May 16th, greeted by a large group of clerics and faithful parishioners. The diocese website states, “After the resignation of His Excellency, Mar Sarhad Yawsip Jammo, Rome appointed Mar Shlemun Warduni as the Apostolic Administrator until a successor is chosen for the Chaldean Catholic Diocese of St. Peter the Apostle. We ask for continued prayers for our Diocese and especially for our new Apostolic Administrator.”

Mark Arabo, a leader in the Chaldean-American community who has fought to protect Christian refugees fleeing ISIS, issued this statement: “"We welcome the New Bishop with open hearts and minds. While the circumstances of his arrival are not exactly ideal, we feel that this is a step forward for our diocese. We hope that the decision made by the clergy helps to unify our church, and our community.”