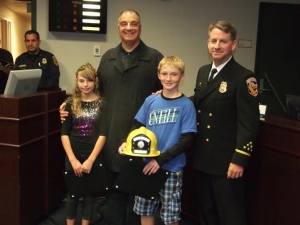 December 16, 2014 (Spring Valley) -- Promising a heightened attention to transparency and public involvement in its decisions and special attention to the area around the community of Crest, three newly-elected members of the San Miguel Fire District, Mike Vacio, Jim Ek, and Theresa McKenna, were sworn into office by El Cajon Superior Court Presiding Judge, Laura Halgren at last Wednesday’s regularly scheduled monthly board meeting.  The three replaced previously elected members, Richard Augustine, Chris Winter, and Jeffrey Lyle Nelson, who lost their bids to serve a second four-year term in the November General Election. The board positions held by William Kiel, Dave Rickards, Karrie Johnston, and Dan McMillan are slated for re-election in 2016. 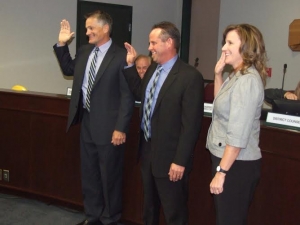 Vacio, a Firefighter Captain with the Alpine Fire District, contends he has no particular agenda, but was motivated to run for the spot on the San Miguel Fire after he was urged by friends to run.  “There are a lot of critical issues which are being faced by the fire district. I felt I have the background, expertise, and motivation to step up and be part of the solution,” Vacio said.

The San Miguel Fire District has had to contend with its own internal wildfires after the district’s previous board made a decision to cease operations as its own entity and partner with the California Department of Forestry and Fire Protection, also known as CAL FIRE. The move came when the fire district, facing extreme budget woes, a closed a district fire station on Dehesa Road to much community outrage. (The station has been reopened.)

East County Magazine has previously reported that prior to the November Election, CAL FIRE and the board members who ran for re-election claimed the partnership had led to improved and more efficient operations and was the best option for the district to consider in light of its financial difficulties. The challengers ran on a platform arguing for more local control from CalFire as they believed that some aspects of public safety had been compromised in light of the merger.

One of the first orders of business of the new slate of board directors was the appointment of officers where William Kiel was unanimously elected board president, following unanimous votes for McKenna as vice-president, and Dan McMillan as secretary.

The board then discussed the fire district’s ongoing efforts to improve its outreach to the community in and around Crest, unanimously voting to hold two board meetings each year in that area, with actual dates of those board meetings to be announced in the future. During those meetings, it hopes to continue a dialogue with the community on developing improved access roads and working with local residents on improving evacuation procedures during fire emergencies.

Discussion also centered on better utilizing the district’s website for communication with all residents within the San Miguel Fire District facilitating compliance with State of California Public Records Act Requests.

The board also recognized the efforts of outgoing Community Outreach Coordinator, Leonard Villareal, who is retiring after joining the district in 2007. With Villareal’s departure, the full-time position will transition into a part-time position when a replacement is found due to the district’s continuing budget concerns.  Before joining the San Miguel Fire District, Villareal was a longtime television journalist at San Diego’s ABC affiliate, 10News.

Another agenda item during the meeting was the official recognition of El Cajon youngsters, Christopher Rand and his sister, Alexandra, who were instrumental in aiding firefighters during a family medical emergency.

Before closing the meeting, the newly appointed board president, William Kiel, said, “we have a lot of challenges in front of us.”

The next regular meeting will be held January 14, 2015 at 5:30 p.m. at the San Miguel Fire District’s Headquarters at 2850 Via Orange Way in Spring Valley.