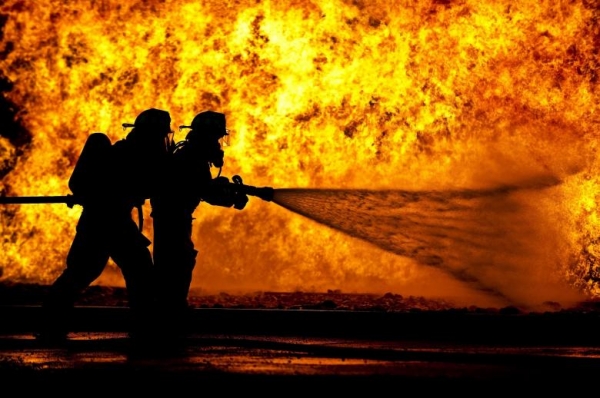 December 10, 2020 (San Diego’s East County) -- Amazon Prime announced on Dec. 8 that it will ban products that contain “forever toxics” or PFAS/PFOS in their Amazon Kitchen Products. But the same banned chemicals remain in many products – including foam used to fight industrial and airport fires, as well as in firefighting gear and more.

The movie “Dark Waters” illustrates the dangers of these chemicals, which are contained in many consumer products, have been linked to cancer and never break down in the environment.

Senate Bill (SB)1044 makes changes to the PFAS levels allowed in fire-fighting foam, will go into effect Jan. 1, 2022 in California.

John “Jack” Sexton, with Pyrocool Technologies, alleges that the bill does not go far enough in protecting firefighters from the toxins in competitors’ firefighting foams. His company produces firefighting foams without PFAS/PFOS, but though he contends the products are effective, they have not been authorized by federal authorities.

“Regrettably, Senate Bill 1044 doesn’t really change much. Many states have passed laws with the same headlines. The simple fact is that the law prevents training with AFFF (PFAS foam). If you are a department that didn’t or rarely used AFFF, you can’t use it. If you are an industrial user, you can keep using AFFF.  This year, Washington State, which passed the first PFAS ban legislation went back and amended its legislation to ban AFFF unless its use is required by federal Law,” says Sexton. Sexton contends that fire related councils have resisted updating their recommendations of which products to use.

“Only Palomar Airport has on-site firefighting capabilities – equipment, personnel and supplies – all other county airports are supported by local municipal firefighting services,” said Donna Durckel, group communications officer, land use & environment, for the County of San Diego via email.  Palomar Airport does have limited amounts of firefighting foam with polyfluoroalkyl substances (PFAS).  The FAA requires airports to only use foams they have certified, all of which have PFAS – there is no alternative.  Therefore, California airports will have to continue to use foams with PFAS until the FAA certifies an alternative.  Once the FAA certifies a foam without PFAS, Palomar would transition to the new foam,”

When asked if the county is preparing for the changes effective Jan. 1, 2022 to different fire- fighting foam that does not use PFAS, Durckel responded, “Currently, there is no alternative product,” said Durckel.

The USS Bonhomme Richard suffered severe damage from an arson fire, enough so that the naval vessel has been decommissioned as unusable.  Multiple firefighting agencies worked to stop the fire. A public request for records has been submitted to the US Navy but ECM is awaiting the results.

Now,even the Navy is going under the microscope regarding which military sites have suspected PFAS/forever chemicals contamination.  Below is a Nov. 2019 story addressing the problem. It is undetermined if PFAS fire foam was used during the fire fighting on the USS Bonhomme Richard.  Requests for public records have been submitted to the Navy and the SDFD.

Update:  The City of San Diego responded to a request if the foam used to fight the naval ship contained PFAS/PFOS.  The city responded on December 15, 2020 with: "After a dilligent search and reasonable inquiry, the City has determined it has no responsive records.  SDFD has no knowledge of any foam being used to extinguish the fire."

Professor Graham Peaslee, with Notre Dame University, has conducted tests and studies on the effects of PFAS/PFOS contamination. He is a leading expert in the field and tested products from Pyrocool.

“Yes, we tested the Pyro oil FEF A/B foam, and it was fluorine free,” said Professor Graham Peaslee. “He (Sexton) is right about the fluorochemical council trying hard to stop the bans.”

“The text (SB1044) said phase out use of AFFF in a year (2022), it is reportable as a spill if used and users will have to pay for exceptions,” he said. “It also has a provision to label garments with PFAS.”

“The bill, I think, does something that other states do not do yet,” said Professor Peeslee. “For example –SB1044 requires warning labels and to ban the use of AFFF.”

As to fire councils not calling for PFAS bans earlier?

“I don’t see it as intentional, it’s a lack of education.  The fire service council was told it’s safe, but now they’ve gotten a hint of why it is unhealthy,” he said. “AFFF (PFAS) exposure works in many ways – cancer, thyroid issues and can suppress the immune system – that’s pretty scary,” he concluded.