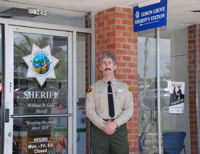 May 6, 2012 (Lemon Grove) -- Captain Pete Callewaert is assuming command of the Lemon Grove Sheriff's Station. He is replacing Captain Gigi McCalla who will be moving to Personnel Division following the promotion of Commander Don Fowler.
Mr. Callewaert comes to Lemon Grove after being promoted from the Weapons Training Unit, where he served as Lieutenant for a year  and  a  half.  Before  that,  he  worked at the Santee and Vista Sheriff's Stations.  His prior assignments as deputy and sergeant  included stints at Las Colinas, Vista and Central Jails, San Diego Regional Fugitive Task Force, Special Investigations, In‐Service Training, narcotics investigations in East County as well as patrol beats in Vista and Fallbrook.
Captain Callewaert has been with the Sheriff's Department for 24 years. Prior to becoming a deputy, he served as an officer in the U.S. Army. He holds a Bachelor of Arts degree in Criminal Justice from the University of Nevada‐Reno.
As the new Captain, he wants to stay a step ahead of the criminals by using Intelligence‐ led policing methods. The goal is find out where the crime hot spots are and why. He will also continue the progress made by his predecessors in reducing the crime rates for Lemon Grove, Spring Valley and Rancho San Diego. Captain Callewaert says: "I believe we have a lot of dedicated and talented men and women at the station.  It is my intent to use their skills and dedication to address all crime problems in an effort to improve the quality of life for the citizens we serve."
Lemon Grove Mayor Teresa Sessom is looking forward to working with Captain Callewaert, "On behalf of the City Council, I welcome Captain Pete Callewaert to Lemon Grove. The City strives to provide proactive law enforcement with an emphasis on customer service for its residents and businesses.  The Sheriff’s Captain plays a significant role in ensuring that those objectives are accomplished.  Captain Callewaert’s breadth of experience, leadership skills and enthusiasm will be an asset to the City in fulfilling its public safety goals."

Captain Callewaert begins as Captain of the Lemon Grove Station on May 18th.