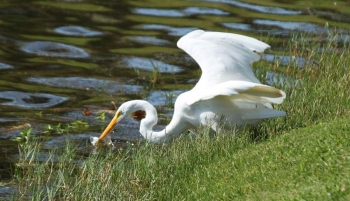 October 21, 2011 (Santee) -- This resident of the East County can be found at many lakes in our area. Egrets have been found as far east as Cuyamaca Lake, but are commonly seen at Lindo Lake, Lake Jennings and Santee Lakes, where this Great Egret was photographed.

The Great Egret (also known an the Common Egret) is a large wading bird found worldwide. It is the second-largest member of the heron family in America (second only to the Great Blue Heron). This beautiful bird’s wing span extends from 5 ft. to 6 ft., compared to the Red-Tailed Hawk's wing span of 3.5 to 4.5 ft. 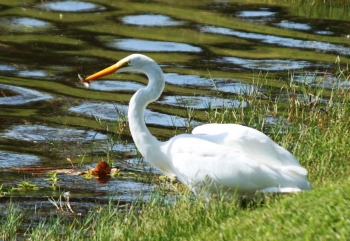 Egrets are excellent fishermen who stand motionless in the water waiting for fish,although snakes, frogs, or some insects may be added to their diet.

In the early 20th century, the long feathers of the Great Egret were used on ladies’ hats. The species was almost hunted into extinction. Fortunately, the Great Egret has enjoyed a recovery that is still continuing. The longevity record for a wild Great Egret is nearly 23 years. If you’re out at one of our lakes in the East County, keep an eye out for this majestic bird.

Greg Dunne is an avid birder, naturalist, and native of East County.

beautiful birds that I have seen all round the world

I thoroughly enjoyed your column about the Great Egret. I have seen this bird on my walks around Santee Lakes and I am glad to learn a little something about it.

Glad to see your enjoying the walks and birds!