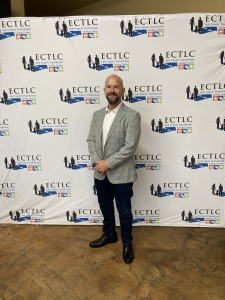 September 28, 2022 (El Cajon) -- The East County Transitional Living Center (ECTLC) in El Cajon announced that it has appointed a new CEO to take over after the passing of its previous CEO and founder, Harold Brown.

Michael Branch, the center’s new CEO, is a Navy Veteran who has an extensive career in treating those with addiction, mental health and those experiencing homelessness. The center held a meet-and-greet on September 14, which marked his official fourth week as ECTLC’s new CEO. In an interview with ECM, Branch shared how ECTLC helped him during a difficult time in his own life, and his goals as leader of the nonprofit that helps homeless people transition off the streets.

“Through the years I’ve referred other people here, clients, friends and family to go through this program. After Harold passed in February, I just asked the board of directors if I could be part of the selection process, if I could put my hat on the ring and then six months later, I was selected,” he said.

Branch’s history with East County Transitional Living Center began 12 years ago when he stated that he was going through a difficult period in his life. “The first time I came to know about East County Transitional Living Center was 12 years ago, April 2010, when I was struggling with some readjustment issues from my time in the military and a friend of mine from church recommended that I come get some help here and it was a life saver for me. It was a place that I could go to get long term treatment and it didn’t cost my family anything.”

Since graduating from ECTLC’s program in 2011, Branch went back to school to obtain an undergraduate degree in biblical studies and then furthered his academic career by getting a master’s degree in social work. “I knew after I left here in 2011, I wanted to work in addiction and mental health,” Branch told ECM.

Since Branch is a veteran and many veterans are either experiencing homelessness or have experienced homelessness, ECM asked him if he had such an experience.

“I was one of those that was not homeless when I came into the program. My situation was I could have gotten treatment for my alcohol issues through the Veterans Administration,” but added that there were two qualifications that posed problems.

“There was a 28-day program I could have qualified for, but I needed long term care at the time. That’s what my family and I had decided. The other program the VA offered was Veterans Village of San Diego. One of the criteria in order to go there is that you have to be homeless; because I wasn’t homeless, I didn’t qualify to go for that program. So I had to find another one and this is the one that I found through a friend at church.”

He adds, “It all worked out great because this is where I really needed to be. Not only did I have to find treatment and get my drinking under control, but I needed to have my spiritual walk cleaned up and figure out, you know, where I was going with that.”

Branch explained to ECM that through his experience as a clinical therapist for 8 years, he believes that there is a high correlation between mental health and homelessness although he does not feel that is the only factor that can cause homelessness.

“I think there’s a very high correlation of addiction and some mental health issues that create homelessness, but I also believe that there’s some people that are homeless that are not addicts and don’t have mental health issues, there’s other lifestyle challenges that come up,” Branch said. “There’s a high percentage of those folks that are homeless that are using drugs and alcohol to self-medicate their issues or maybe even their addiction is what put them in the streets. But there’s also a portion of those folks that are there from other circumstances and challenges.” He explained that the COVID-19 pandemic, for example, caused people to lose their jobs, which caused them to lose their homes.

As new CEO, Branch has many ideas in store for ECTLC.

“We want to raise money to do some construction projects around here, because we are a real grass roots organization that doesn’t say no to anyone. All the money that comes in is spent on the program,” he said. “We don’t have a huge budget like some of the other programs where they’re top-heavy and a lot of their money goes to the administration of the program. Our budget is just to survive and to take people in off the streets.”

Branch also plans on revising the curriculum. “We are going to look at curriculum development and program development. Take a look at, you know, how long we have been using this curriculum and to find the most recent or what you would call ‘advanced curriculum.’ We want to make sure that we are doing best practice here.” Those are the initial issues he would like to address, but he added that he’s sure more will arise in the coming weeks.

Even though ECTLC is faith-based, the facility still offers help to those who aren’t necessarily seeking that path in the first few months. Branch elaborated, “We are a faith-based 501c3 nonprofit and that is our men’s and women's discipleship program and our family restoration ministry, so that is why we exist and we’re going to continue to exist in that manner. However, the initial 60 days, we want to give people the opportunity to come off the streets and have an opportunity to see this program and how we run it and what we do. If it’s not the program for them which it’s not going to be the program for everyone, we’re okay with that. We’re going to provide you with case management and 60 days of food, clothing, and shelter, and let’s find you the place that you need to go to get healthy and get well and come off the streets.”

During the initial 60 days those seeking help to get off the streets are not required to go to Bible study or do any of the other curriculum. “They can self-select and they can come in and if not, we are going work to get them other permanent supportive housing or find a program that works for them,” Branch told ECM.

ECTLC has 72 rooms on the main campus, which are single living areas for both men and women called the Men’s Ranch and the Women’s Home respectively. “There are basically two ways we could go at the end of the 60 days,” said Branch. “People can select to come into the faith-based side of our program, which is a one-year, four-phase program, or at the end of the 60 days, work with case management and work towards finding other permanent supportive housing or a program of their choice that works for them.”

If a person decides to stay at ECTLC and commits to the center’s four-phase program, they will be expected to do life skills training, Bible study, receive an education on addiction and other social challenges or lifestyle choices. During second, third and fourth phase the person seeking help will work towards their transition and reuniting back with their families. It is also required that they restore those relationships with their families.

If they don’t have a high school diploma or General Education Development (GED) it’s mandatory that they take GED classes and get their GED. They will also work with the resource center and case managers to find employment, write resumes, do mock interviewing for job training. By the fourth phase, the goal is to have them seek employment and start to identify where they are going to be housed. These phases take roughly a year, but can be extended to another six months, as long as people are working towards the end goal.

Branch says of those still living on the streets, “I mean it’s heart wrenching, nobody would choose that for themselves when they’re in their right mind and when they have the means. As a community our faith-based partners, our city and county government, our other non-profits, we can all come together to address this issue, and we all have different ways that we might approach it.”

But he concludes, “You can take people from all different walks of life and different belief systems and everything else and work together to end homelessness."