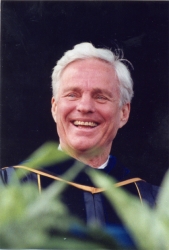 How he dealt with the admissions wars—the political, legal and academic consequences of that historic and controversial decision, as well as the issue of governance—is discussed in a new book by Patricia Pelfrey recently released by the University of California Press entitled The Entrepreneurial President: Richard Atkinson and the University of California, 1995-2003.

Another focus of the book is the entrepreneurial university, exploring the expansion of the University of California’s research enterprise into new forms of scientific research with industry during Atkinson’s presidency. The final crisis of his administration was the prolonged controversy over the UC’s management of the Los Alamos and Livermore nuclear weapons research laboratories that began with the arrest of Los Alamos scientist Wen Ho Lee on charges of espionage in 1999.

Entrepreneurial President explains what was at stake during each of these episodes, how Atkinson addressed the issues and why the outcomes matter to the UC system and to the people of California. Pelfrey’s book provides an analysis of the challenges, perils and limits of presidential leadership in the nation’s leading public university, while bringing a historical perspective to bear on the current serious threats to its future as a university.

Entrepreneurial President is available for purchase at: http://www.ucpress.edu/book.php?isbn=9780520270800