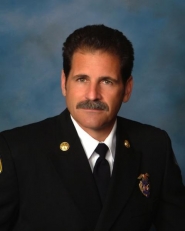 Sitta has been heavily involved in fire operations throughout the region, including Command Staff positions on Cal Fire Type I Incident Management teams for major wildland responses throughout the State of California, and an active participant in the implementation of operational policies being shared by fire agencies Countywide. Sitta was honored with a commendation for bravery during the devastating 2003 Cedar Fire in San Diego County.

The City Managers confirmed that Sitta’s selection will be effective today. He will be paid $134,950 annually.

As the new Heartland Fire Chief, Sitta will oversee operations of the cooperative management services for the three fire and rescue departments in El Cajon, La Mesa and Lemon Grove. The three cities merged their fire services on January 1, 2010, after the City Councils for those cities approved a Joint Powers Agreement that created a single management team to oversee the day-to-day operations for the three fire departments.

“The Joint Powers Agreement which formed Heartland Fire & Rescue has been a major success”, said Douglas Williford, “and Rick has played a significant role in that success. We were fortunate to have such a highly qualified individual already within the organization and we look forward to working with Chief Sitta as he assumes his new duties.”