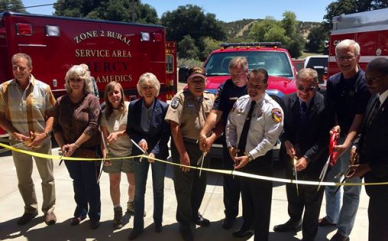 June 6, 2015 (Boulevard) – Last week, a brand new fire station opened in Boulevard.  The $3.5 million, 8,000 square foot facility replaces an older station across the street. Capable of housing up to six vehicles, the new fire station is the first to house County Fire Authority reserves along with Cal Fire firefighters and a paramedic unit under one roof.

Supervisor Dianne Jacob, who led efforts to secure funding, was on site for a ribbon cutting along with Boulevard Planning Group Chair Donna Tisdale, Cal-Fire Chief Tony Mecham and other local dignitaries.

An East County Magazine investigation in the past had found Boulevard's fire station was closed nearly every day for three months due to a shortage in staffing and funds. The station has now transitioned to be part of the County Fire Authority.

Jacob called the new station a huge improvement” to public safety for our region. In addition to serving residents, the station’s firefighters and paramedics also respond to help motorists when accidents occur along I-8 and other highways in this rural region of East County.