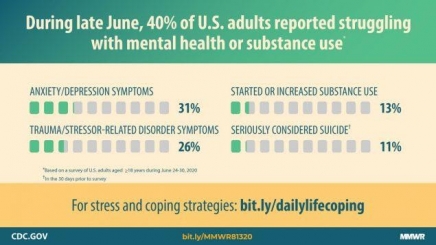 October 24, 2020 (Washington D.C.) – Starting in July 2022, anyone in the U.S. will be able to dial 988 for help with a mental health emergency. President Donald Trump signed a bipartisan bill into law last week to create the three-digit number for a mental health crisis, similar to the 911 line now in use for all emergencies, on recommendation of the Federal Communications Commission.

Unlike the currently used "911" hotline, which often dispatches law enforcement to the scene of a crime or dispute, "988" will connect the caller with a local crisis center, changing the way we respond to those suffering from a mental health emergency.

Some might be helped with a phone conversation, without dispatching police. Communities may also opt to have mental health calls responded to in person by trained mental health personnel or a mobile crisis team.  States can charge wireless phone service fees to help fund 988 services, under the new law.

There is already a National Suicide Prevention hotline: 1-800-273-TALK, which has seen a significant rise in usage due to increased stress people face during the pandemic. According to the Centers for Disease Control, in late June, a shocking 40% of American adults reported struggling with mental health or substance abuse issues. Specifically, 31% reported anxiety or depression symptoms, 26% had trauma stressor-related disorder symptoms, 13% reported they had started or increased substance use, and 11% said they seriously considered suicide.

But the 10-digit suicide hotline number is difficult to remember. The three-digit 988 number is expected to be a “game changer,” according to Robert Gebbia, CEO of the American Foundation for Suicide Prevention, NPR reports.

Currently, the national hotline routes calls to local crisis centers that may be backlogged, causing dropped calls or long delays to speak with a crisis counselor. Even calls to 911 at times go unanswered due to high call volume or staffing shortages.

The new law includes funds to increase capacity of local centers to handle more calls when the 988 line rolls out, an action that is expected to increase the number of calls – and save lives.