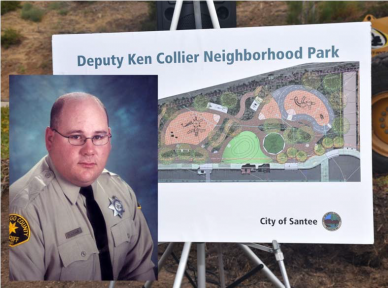 December 11, 2016 (Santee) – The City of Santee held a grand opening Saturday for Deputy Ken Collier Neighborhood Park, located at 9170 Via de Cristina, just east of Fanita Drive and north of Prospect Avenue.  The new park is named in memory of Deputy Collier, who was killed in the line of duty in 2010 while trying to stop a drunk driver who was traveling the wrong-way on Highway 52.

The half-acre park includes two playgrounds, a half-acre basketball court, outdoor exercise equipment, benches and a picnic area.  Playground equipment is made from recyclable materials. The park also has drought tolerant trees and shrubs, as well as a solar‐powered overhead light.

The City of Santee says the project's budget including design and engineering is $1.2 million with state and local grants helping to offset the cost.

According to the Sheriff’s department, Deputy Collier often showed his patrol car to children in his beat and they believe he would be very happy to see the park offering various sports activities for children.  Deputy Colliers’ former patrol partners and his fiancé attended the park opening. (View video)

The Sheriff's also remembers Deputy Collier each year by campaigning against drunk driving year-round and participating in Walk like MADD hosted by Mothers Against Drunk Driving every year.