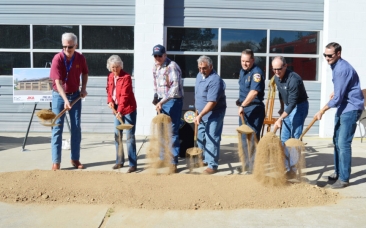 December 13, 2017 (Pine Valley) -- County and fire officials broke ground Wednesday on a new $8.2 million fire station that will serve the Pine Valley community for the next 50 years.

“This new station helps deliver on our promise to boost wildfire protection in our most fire-prone communities,” said Supervisor Dianne Jacob, chairwoman of the Board of Supervisors. “Since the deadly Cedar Fire in 2003, the county has spent $460 million on fire and emergency service improvements in the backcountry — and this new station builds on that.”

San Diego County Fire and CAL FIRE Unit Chief Tony Mecham said the Pine Valley fire station is strategically located for fire response because it not only serves its community of 2,000 residents, but it also offers secondary support to surrounding communities including Descanso, Mt. Laguna and Boulevard.

“We are planning for the future fire service needs of Pine Valley, and building an efficient and expandable facility that will be able to accommodate the community as it grows. It will be a better fit in terms of size and safety for our firefighters and apparatus, and it will be a vast improvement to the community,” Mecham said.

“The new station will meet current firefighter facility safety standards and will have diesel pumps on site so engineers don’t have to leave the station and drive to Descanso to refuel. By reconfiguring the station’s fire engine entrance and the road to come and go from the new station, we are confident this will reduce response times,” he added.

The new two-story station will be double the size of the previous station. When it was built in 1974, it was not designed for full-time firefighters because Pine Valley was then protected by volunteers who were called in to respond to incidents. Now, full-time firefighters live in it during their 24-hour shifts. When the new station is built, it will have sleeping quarters to accommodate up to 15 firefighters and command staff.

The new two-story station will be 13,090 square feet and will include ample room for fire vehicles and equipment, a dayroom, a fitness room, and a kitchen, and be topped by a solar panel roof.

After the new station is opened, an ambulance and possible second heavy rescue unit will bolster its response capabilities. It is being built on the land where the previous station stood, with the addition of a portion of an adjacent property purchased by the County.

“The new station will be built to silver certification in Leadership in Energy and Environmental Design (LEED) standards aimed at conserving water, electricity and building materials,” said County General Services Director Marko Medved. “So we are making this facility more functional and sustainable, while greatly improving the quality of the work environment and our crew’s readiness.”

Finally after a lot of effort by the County BOS and the community of Pine Valley they are off and running.
Photo at: https://www.facebook.com/groups/medisaster