March 6, 2016 (La Mesa/Santee) - On Saturday, March 5, 2016 the city of La Mesa and the city of Santee held one of their most grand traditions, the Miss La Mesa and Miss Santee Pageants.  The programs have been a tradition in the cities since the late 1960’s and are an outstanding mentoring program for young women.  Mayor Voepel from Santee and Mayor Araposathis from La Mesa were in attendance to formally present Miss La Mesa 2016 Susanna Wiggins, Miss Teen La Mesa 2016 Jennifer Barillas, Miss Santee 2016 Marrissa Lawrence and Miss Teen Santee 2016 Kaylyn Rambo.

Young women from San Diego's East County entered the pageants in hopes of becoming their new city ambassadors.  The contestants were scored on personal interview, speech, poise and personality, evening gown, physical fitness & beauty and on-stage question. The young women will spend their year attending grand openings, parades, city events and charity events and fundraisers.  Each winner will receive a $500 college scholarship along with a list of other prizes which can be found on our website www.4pointsevents.com.

The results were as follows:

Jennifer Barillas, Miss Teen La Mesa 2016, has already begun to make her mark on the world. She represented the US while abroad under President Eisenhower’s prestigious People to People Program, created “The Gold Coast Initiative” a book drive for Ghana, and aspires to become a human rights lawyer. Jennifer is a scholar at Helix High School and is involved with numerous organizations on campus. In her free time Jennifer enjoys singing, swimming, playing golf and belly dancing. She adores La Mesa because of the hidden treasures scattered around the city. 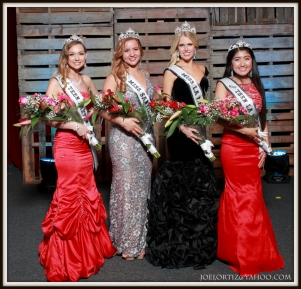 Kaylyn Rambo, Miss Teen Santee 2016, is a 16-year-old sophomore at West Hills High School. She volunteers with the City of Santee and her church on a weekly basis and has over 300 hours dedicated to her community.  Some of her favorite things include dancing, cheerleading, competitive swimming, and experimenting with make-up design. When Kaylyn gets older she aspires to become a Wedding Planner. Kaylyn loves that Santee has a small community atmosphere where is able to get out and meet her neighbors. She is excited to represent her city this year!

Susanna Wiggins, Miss La Mesa 2016, is a 20-year-old junior at San Diego State University where she is working on her Business Hospitality degree.  She stays involved at school with the Delta Gamma Sorority and the Rotaract Club through which she attends La Mesa Rotary meetings.  Susanna is a San Diego Gulls Ice Girl attending community events, promoting the San Diego Gulls, and interacting with fans during the game.  Susanna is most proud of her recent accomplishment of scoring 100% on her calculus final at San Diego State. In her free time, Susanna enjoys photography, baking, hiking and yoga. She is excited to represent the city she calls home.

Marrissa Lawrence, Miss Santee 2016, is a 19-year-old student at Grossmont Community College. She aspires to be a zoologist and an animal caretaker for the San Diego Zoo. Marrissa hopes to one day travel the world learning about different animals in their natural habitats and surroundings. In her free time, Marrissa enjoys playing softball, running with her dog and surfing. A fun fact about Marrissa is that she is a twin! Having held the title of Miss Teen Santee 2013, Marrissa is excited to have the opportunity to represent her city again.