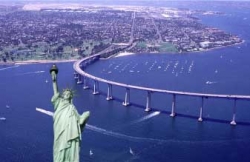 February 2, 2010 (San Diego) – A statewide report on immigrants released this week reveals that 23% of residents in San Diego County are immigrants—and nearly half (45%) of those immigrants are citizens. Of all children in the region, 43% have at least one immigrant parent. These and other intriguing findings are based on data collected in the 2005-2007 American Community Survey from the U.S. Census Bureau.

Immigrant households make up 22% of the total household income in our County and “thus represent a substantial share of all spending power,” the report states. Immigrants produce 25% of our region’s gross domestic product, contributing to San Diego County’s economy. Immigrants account for 27% of San Diego County’s labor force, including the majority of workers in farming, fishing and forestry, as well as grounds cleaning and maintenance. They make up nearly half the jobs in production (44%) and 40% of food preparation and serving.

The majority (61%) of all immigrants over age 16 are employed – nearly identical to the 63% of non-immigrants’ who are employed. Among Latino and Asian immigrant men, the percentage who are working is even higher—84%. In San Diego, Latino immigrants are also more likely to create their own jobs or be self-employed than native-born workers.

Nearly half (45%) of all immigrants in San Diego County are citizens. There were over 170,000 immigrants eligible to become naturalized citizens during the survey period(2005-2007) in San Diego County—and about 60,000 more who would be able to naturalize over the next five years (2008-2012). “This will add to the base of voting-age population who are naturalized immigrants (16%),” the report concludes. Fully 71% of non-citizens live in households with citizens.