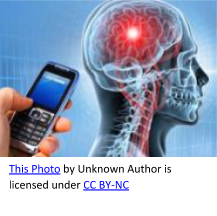 November 12, 2020 (Sacramento)  - A review of scientific literature out this week found that using a cell phone more than a thousand hours raises your risk of developing a tumor by up to 60%.


Experts from Berkeley and Seoul, South Korea, reviewed 46 studies on cell phone radiation and concluded that pressing a cell phone to your ear for 17 minutes a day for a decade is hazardous.

Joel Moskowitz, director of the Center for Family and Community Health at the University of California-Berkeley's School of Public Health, said people should never hold a cell phone to their head.

"People should protect themselves by not keeping the phone on their body or near their head, particularly when making a call," said Moskowitz. "But also, whenever the phone is turned on, it shouldn't be kept near the body. "

The study found that heavy cell use can increase the risk of several types of brain tumors. The Federal Communications Commission says its tests show that normal cell phone use is safe.

The FCC recently intervened in favor of the cell phone industry in two lawsuits.

One suit alleged that iPhones on the market emit more radiation than the legal limits - but a federal judge accepted the FCC's tests which showed the iPhones in compliance.

Moskowitz said the agency's radiation standards and testing procedures are 30 years old and should be revised.

"The FCC claims it's been providing sufficient health warnings to the public," said Moskowitz. "Yet it's extremely difficult to find any health warnings if one goes to the FCC website. In fact, they've been covering up for the industry, along with other government agencies, for well more than a decade."

In a separate case, a federal judge recently ruled that the City of Berkeley cannot require stores that sell mobile devices to post a safety notice.

The notice would have advised people that when carrying the phone in a pants or shirt pocket, or tucked into a bra, they may exceed federal guidelines for exposure.