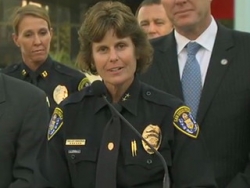 The SDPOA also cited her accomplishments in working with elected officials to improve communications issues, streamline hiring to address chronic understaffing, and working toward competitive compensation for officers.

Zimmerman has served in the San Diego Police Department for 31 years.  She has worked in almost every division, from vice to narcotics to community affairs. She holds a degree in criminal justice from Ohio State and has also graduated from the F.B.I. Academy.

Faulconer has said he will ask Council to formally approve Zimmerman at the next Council meeting and insiders predict the appointment will sail through.  Zimmerman and Faulconer are friends, having trained together for a recent bicycle event, but have said that appointment was not political in nature.