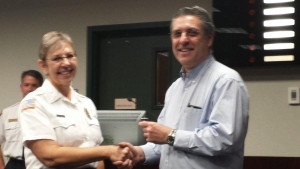 January 15, 2015 (Spring Valley)--Following a campaign promise which rode a trio of new directors into office on the San Miguel Fire District Board last November, board member Theresa McKenna has introduced a proposal to return control of the agency to local management control. The district currently has a partnership with CAL FIRE to manage firefighting services that was adopted due to an earlier budget shortfall.

McKenna proposed that an ad hoc committee be formed to study the feasibility of the management change at the agency’s regularly scheduled monthly meeting on Wednesday evening, January 14th.

Noting that the fire district has been able to weather a financial wildfire that forced a temporary closure of the Dehesa Road Fire Station, McKenna said it is time to begin actively studying the possibility of ending its relationship with the California state fire agency. The motion was seconded by Board President William Kiel and was carried unanimously. Board member Karrie Johnston was not present at Wednesday’s meeting.

McKenna, alongside Mike Vacio and Jim Ek, defeated three incumbents on the board on a platform arguing for more local autonomy from CAL FIRE.  They contended that some aspects of public safety and local control have been compromised under the current arrangement with the State of California.

The committee will study the ramifications of leaving the auspices of CAL FIRE, including the financial commitments the fire district has made to the state on firefighter retirement benefits and other expenses.

“A changeover is not going to happen overnight,” Kiel said. “There are many things to be considered, including the fiscal risks of such a move, whether it is at all viable, and under what conditions we can make such a move.” He continued to say it will take a good six months for the evaluation to take place and a year’s notice to CAL FIRE about any changes in the management of the fire district.

At the beginning of Wednesday’s meeting, longtime San Miguel Fire District Fire Inspector Natalie Grimes was recognized for her 15 years of service to the district. Grimes came to the district after a tenure with the U.S. Government Fire Service in San Diego. But it was a U.S. Navy career in the Aleutian Islands which led Grimes to a career in firefighting in the first place.

“I was stationed with a U.S. Navy Fire Department in Adak. I was always treated very well there where the guys always made me feel like a part of the team. I was never given any special treatment while I was serving with them. I was there right by them lifting hoses, helped in part that I was not exactly a small woman and kept myself fit,” she said.

While Grimes enjoyed her role as a firefighter with the federal government, she always kept out an eye for career opportunity with a municipality allowing for more personal involvement with the community. “Some people think that my responsibility as a fire inspector is all about being a gruff enforcer. The big reason why I enjoy my job so much is that I can work with residents and businesses in helping keep the community safe,” she said.