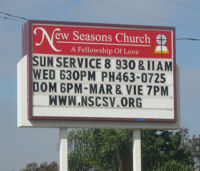 By Janis Mork
August 14, 2012 (Spring Valley)- ECM recently visited a food distribution center at New Seasons church in Spring Valley that partners with Feeding America. Angela Kretschmar, who is in charge of the event at this distribution site, said that they have a food distribution center here because “this a home church that supports nonprofit.” Even Liz Landa from Feeding America came out to support this event.
After getting the food prepared, Kretschmar got all the volunteers in a circle. She explained how there were different roles to be filled, such as handing out the food, carts to carry the heavy bags of produce to the people’s cars, and volunteers standing behind the line of produce and stocking up the produce again if supplies got low. Some volunteers control traffic while others help break the empty boxes and clean up while the food is handed out. After explaining what needed to be done, Kretschmar led the volunteers in a short, but sweet prayer. Another volunteer named Alba Cruz said a prayer in Spanish. Once everyone got to their stations and got ready to help out, those in need began moving ahead and volunteers handed out the desired produce. There were a lot of products ranging from clothes and shoes to healthy food such as watermelon and broccoli. However, there is a lot of variety as to what is handed out because “there are different products each time.” 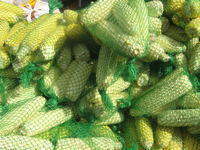 Kretschmar explained how those in need “begin lining up as early as six in the morning” even though the event doesn’t start until nine. As the produce was handed out, volunteers greeted the people warmly and the people accepted the produce with grateful hearts. While the food was distributed, Krestchmar oversaw the whole event and assisted those people who needed help or had questions. She reported that “385 families came out, total 1,480 individuals.” Also, “there’s been an increase since last year and the year before. It has tripled since last year.”
There was a good amount of people that volunteered, even some young kids. A woman named Tina Flores has helped volunteer since the food distribution site started at New Seasons in 2009 because  “1) I work at the church, and 2) If I wanted to get food, I would love to see smiling faces serving me. This program not only benefits Spring Valley, but the whole community. One thing God teaches us if you’re a servant, the best way is to serve God.”

If readers are interested in volunteering for this particular distribution site, this event takes place monthly on the fourth Tuesday at nine o’ clock to ten-thirty in the morning. To find out more about the New Seasons Church distribution site, those interested may call (619) 463-0725. Word gets out for this site by calling 211, getting in touch with food banks, there are a lot of distribution sites and people talk amongst themselves.
Flores explained that the community can help out by “giving up their time if they are financially available. Time is always an awesome thing to provide.” She also encourages “more outreach” because  “we’re always looking for servants.” One thing people can do is to  “stand behind other programs that help, not just here at New Seasons Church (i.e. education).”
To find out more about Feeding America in San Diego, readers can go to www.sdfeedingamerica.org.