The new facility opens with 90 to 100 staff who are moving from the Lemon Grove substation. 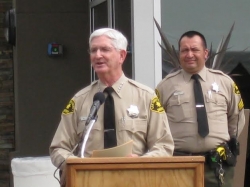 Sheriff  Bill Gore says the department looked at more than 12 sites before choosing this location.  “It’s long overdue, but when we’re done here it’s going to be really, truly a state of the art facility,” he said during a prior groundbreaking ceremony.

Supervisor Dianne Jacob said, “To the community it means faster response times to emergencies…I have to tell you, I’m thrilled.”

Jacob initiated the board action for the facility, which originally was proposed as a substation. Though she quipped, “There may be a few criminal wrongdoers who won’t be quite so thrilled.” 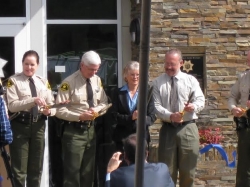 The new site has a more convenient and strategic location, according to the Sheriff’s office.  It will include 27,000 square feet for the Substation on a five acre lot and will include patrol operations, investigations, office space and support facilities.

The total project budget, including land acquisition, planning, design and construction, is $17.5 million.