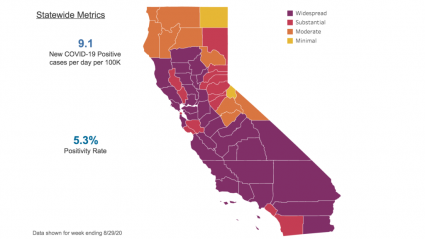 By Christine Huard, Times of San Diego, a member of the San Diego News Association

Photo:  Based on data released by the state Sept. 8, San Diego County is headed toward “widespread” status, which will bring back restrictions. Map via https://covid19.ca.gov/safer-economy/.

September 9, 2020 (San Diego) - State data released Tuesday shows San Diego County is regressing in its fight against COVID-19, with the number of new cases per 100,000 people reaching 6.9 and the percentage of positive tests at 4.2%, perilously close to slipping into the “widespread” tier like much of the rest of the state.

The county is in Tier 2, or the “substantial” tier, the state’s second most strict. With a slight bump in new cases per 100,000, San Diego could find itself closing recently opened businesses.

The numbers for the widespread tier — which every other Southern California county besides Orange County finds itself in — are 7 or more new cases per 100,000 and more than 8% positive testing. Just one of those above guidelines could be enough to push a county up a tier.

San Diego County reported  216 new cases on Sunday and 211 on Monday, while the number of confirmed cases among San Diego State University students grew to 396 since Aug. 24.