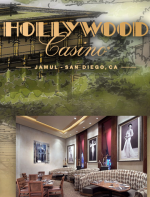 August 10, 2014 (Jamul)--The Jamul Action Committee/Jamulians Against the Casino has filed yet another lawsuit seeking to halt a casino at Jamul Indian Village.  The three-story, $360 million Hollywood Casino Jamul has broken ground and is slated to open in late 2015.

The latest legal action, filed July 16, seeks to invalidate the 1.88 acre easement for soil nails on the Rancho Jamul Ecological preserve immediately to the south of the excavation, as documented in photos taken by a drone.  JAC claims the nails extend several feet and will be filled with concrete. Attorney Steve Volker has prepared a motion seeking an injunction to invalidate an easement, claiming the action violates the California Environmental Quality Act protections for wildlife and the environment.

Fish and Wildlife attorneys are making a claim that because the "nails" are subterranean this will not impact the environment on this federally owned public land.  View complaint: http://www.jacjamul.com/jac-vs-ca-wildlife-conservation-board/

A suit against San Diego County and CalTrans over traffic issues will have its next hearing date on August 22.

Another lawsuit filed by JAC and Jamul Community Church against the U.S. Bureau of Indian Affairs, U.S. Department of the Interior and National Indian Gaming Commission claims the lands are not eligible for gaming because the site was improperly designated as a reservation.  The tribe has sought to have the case dismissed but a judge has granted plaintiffs the right to file an amended complaint by August 26.

The tribe faces an additional lawsuit filed by Walter Rosales and Karen Toggery who contend that the construction desecrated their family remains.  A judge ruled against Rosales and Toggery, who have said that they plan to file an appeal.

The tribe has said that the project is needed to lift tribal members out of poverty and has made significant design changes in efforts to accommodate community concerns such as reducing height by 58% from the original proposal, as well as reducing potable water use by 58% and making other changes. Upon completion, the casino would bring an estimated 2,500 jobs to the Jamul area, according to the tribe’s website. While the exterior will feature earth tones designed to complement the environment, the interior will reflect elements of classic Hollywood.

The  JAC, which represents area residents opposing the project, has repeatedly stated that it does not believe mitigation can adequately address community impacts and that the group will seek to block the casino project in any form.