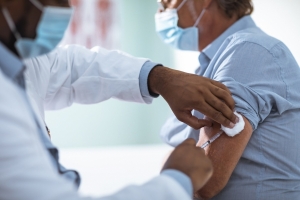 Some counties low on doses

January 15, 2021 (Sacramento) - Six million Californians 65 and older are now eligible for the COVID-19 vaccine — a major shift in strategy that could help accelerate the Golden State’s sluggish vaccine rollout even as some counties say they’re unprepared to handle increased demand.

Gov. Gavin Newsom and state health officials announced the new policy Wednesday, a day after the federal government instructed states to make doses available to people 65 and older and to those under 65 with preexisting conditions. For unknown reasons, California’s new guidelines don’t include the latter group, CalMatters’ Ana Ibarra reports.

The expanded eligibility could help Newsom meet his goal of inoculating 1 million additional Californians by this weekend. But he has a ways to go: As of Tuesday, the state had administered only 889,000 of its nearly 3 million doses, or 31% — one of the lowest rates in the nation. In a sign that frustrations are rising, a bipartisan group of 47 lawmakers sent Newsom a letter Wednesday demanding “a more effective and efficient roll out of these vaccines.”
Meanwhile, not every county or health care provider is ready to begin vaccinating seniors. Los Angeles County still doesn’t have enough vaccine to finish inoculating health care workers. Santa Clara County is focusing on immunizing people 75 and older because it doesn’t have enough vaccine for people in the 65-74 age group. Some health systems, such as Sutter Health, are also prioritizing those over age 75. Tech infrastructure is also strained: Several county websites crashed Wednesday as people rushed to make appointments.
Newsom said Wednesday he would unveil next week “a new system” to notify Californians by email or text when they’re eligible for the vaccine. He added that a second phase of the system would help cities and counties run and coordinate “mass vaccination events.” The state’s current vaccine distribution system has been plagued with technical problems that have exacerbated the slow rollout.