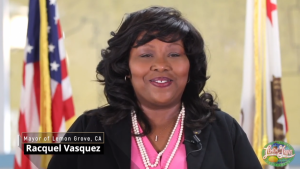 Dec. 15, 2020 (Lemon Grove) --“This year we lived our daily lives a little differently,” Lemon Grove Mayor Racquel Vasquez said during her 2020 State of the City address, which was originally slated for August but delayed due to the COVID-19 pandemic. It was recorded November 30th and posted on YouTube since bans on gatherings prohibit a live address.

“Every day I witness the kindness of our community members in wearing face mask coverings and performing well-being checks for our family, friends, and neighbors," Vasquez  said of the community’s response to the pandemic.

The Mayor cited the work of Lemon Grover clergy, the Lemon Grove Lions Club and Thrive Lemon Grove, in helping residents during a time of great need with food insecurity.

“To date we have delivered weekly groceries and household items to nearly 4,000 Lemon Grove residents,” she said.

Home Start was also utilized to help the homeless according to the mayor.

“We contacted over 90 individuals and were successful in finding housing for many of these individuals.”

“The city and state have leveraged grants to help the homeless,” she said.

“The city council has set aside $650, 000 to support the recovery of our small business community,” said Vasquez and additionally noting other, bigger businesses have been helped as well with monetary grants.

According to the mayor 73 local small businesses, ranging from $5,000 to $10,000 received grants, and noted that many were women and minority owned.

“COVID-19 has accelerated our structural deficit to $1.8 million dollars,” she noted.

She said the city council has taken measures to address the chronic structural deficit.  Below are a few of the steps:

She cautioned listeners, warning, “These cuts are not sustainable.” The Mayor added, “Eighty-percent of the city’s budget is dedicated to our public heroes – our firefighters and sheriff’s deputies.”

As for new revenue sources, she noted,  “Measure J will go a long way in helping to diversity the city’s revenue stream and restore much needed city services. Up to $1.2 million will be generated .”

Measure J, taxing cannabis sales, passed after the filming of this address by an overwhelming 71.9% of the vote.

The wording on the measure stated: “To fund general municipal expenses such as fire, safety, roads and recreation, shall the City repeal the current cannabis tax and modernize it with a new cannabis or hemp business tax at annual rates not to exceed 8% of gross receipts for retail cannabis businesses, and 4% for all other cannabis businesses; which is estimated to generate $560,000 to $1,120,000 annually and will be levied until repealed by the voters?”

Another  new revenue stream is expected to bring in millions of dollars over time to city coffers is an electronic/digital billboard approved by the City Council in 2019.

“This is a two for one, two billboards will come down on Broadway,” she explained, adding, “OUTFRONT Media will pay the city $350,000 per year for the digital billboard.”

“These are significant numbers when you consider our significant budget and staff reductions,” she observed.

Vazquez also noted the tobacco licensing program as a revenue source.  Visit: https://www.lemongrove.ca.gov/business/tobacco-education for further information on the tobacco bill.

Her address ended with an inspirational quote, positive affirmations, and a pandemic inspired phrase.

“Harriet Tubman said ‘Every great dream begins with a dreamer,” she concluded. “Great things are ahead for Lemon Grove. We will end this year unified and strong. Stay safe, stay strong.”

To view the Mayor’s State of the City address in its entirety, visit the link below.