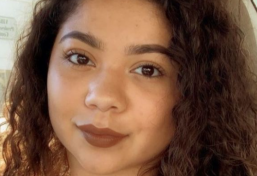 By Miriam Raftery
February 19, 2021 (Spring Valley) – Isabella “Bella” Calhoun-Chipress, 21, had just gotten married last June and was preparing to head off to Marine Corps boot camp when her life was tragically ended by a suspected car thief trying to evade arrest.  Now her grieving family has started a fundraiser to help her husband, Miguel Chipress, pay for his beautiful bride’s funeral.
Calhoun-Chipress was driving home from work at Ikea and was just two blocks from home last Friday night, Feb. 12, when her vehicle and another vehicle were both struck by a teen driver in a stolen car being pursued by Sheriff’s deputies.
Isabella’s mother and husband went looking for her when she didn’t arrive home.  The San Diego Union-Tribune reports that her mother, Evita, Garcia, saw the wreckage of Isabella’s car near Jamacha and Sweetwater roads. She called Miguel, who rushed to the scene, but Isabella was already gone.
Paramedics had  transported her to a hospital, but medical personnel were unable to save her life.  Two people in the other vehicle struck during the collision were injured and taken to a hospital, including a 1-year-old child.
The teen driver, 17, is charged with manslaughter and other crimes. A 16-year-old passenger in the stolen vehicle is charged with having a gun found in the vehicle.
Cecila Chipress, sister of Isabella’s husband, Miguel Chipress, has set up a Go Fund Me page to help pay for funeral expenses.
On the fundraising site, Ceclia says, “Bella and her husband were ready to join the Marines and start their life together. They aspired to buy a home and start a family after joining the Marines.”
She adds that Isabella was a “kind, loving” person who “made you feel special in every way… but her most precious gift was  spending time with her family who she adored with her whole heart.“