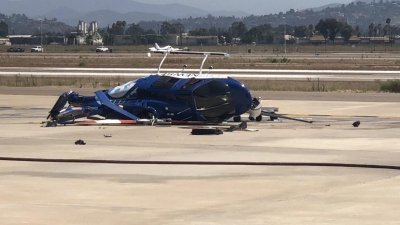 By Miriam Raftery, East County Magazine
Photo by Jill Barto
August 27, 2019 (El Cajon) – A news helicopter rolled over during a landing at Gillespie Field in El Cajon and caught fire this afternoon,  Federal Aviation Administration (FAA) spokesman Ian McGregor told ECM news partner 10 News.
The Bell 206 helicopter is shared by five San Diego news organizations, including 10 News, and is operated by a third party.
The pilot was uninjured by a passenger was hospitalized with minor injuries.
10 News reports that video shows that a helicopter skid may have missed a moveable landing platform, causing the helicopter to flip onto its side and catch fire.
"The people at Circle Air were the real heroes," says Jill Barto, who was at the scene and took the photo above. She says workers at Circle Air grabbed fire extinguishers to help douse the blaze.
A Hazmat team was called to clean up a fuel spill after the fire was extinguished.
The FAA and National Transportation Safety Board are investigating the accident.