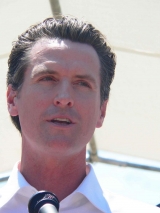 How concerned is Newsom about firefighting capabilities for our region, we asked for starters, and what should be done to assure adequate year-round protection for San Diego County?

“As a Mayor who has done a lot of mutual aid including sending firefighters to this region, that need is underscored at the state level,” he said. “But it’s not just what the state will do. What are cities and counties doing to stave off lay-offs of firefighters? In our City we had no firefighters laid off and we have not closed any fire stations.”

Asked his views on Governor Arnold Schwarzenegger’s proposal to close 80% of state parks as a cost-cutting measure, Newsom replied, “I was so surprised by the Governor’s proposal to shut down parks.” Closing parks would save only about $94 million, a small fraction of the state budget gap, he observed. Newsom revealed that a 15% vehicle licensing fee (VLF) has been offered by the Legislature to keep parks open. “We’re hopeful that in the next 48 hours, that will be agreed on,” he disclosed.

East County Magazine also asked Mayor Newsom if he would sign legislation vetoed by Governor Schwarzenegger which would have guaranteed universal healthcare to every man, woman and child in California including medical, dental, mental health and eyecare coverage.

“I’m the only mayor of a city with universal healthcare,” said Newsom, who chairs a task force on healthcare reform for the National Conference of Mayors. “Unequivocably, yes, I would sign it.”
Newsom has traveled around California holding town hall forums, including one this weekend in San Diego. “Everywhere I go, people have the same concerns,” he said. “The issues are jobs, the economy, healthcare, education, and the environment…It’s pocketbook issues.”

Another reporter present asked the Mayor about gay marriage. “The courts have always stepped in to protect the rights of minorities,” he said, noting that courts declared interracial marriages legal at a time when 70% of Americans opposed interracial marriage. But in California, where the court overturned Proposition 8, judicial, legislative and executive branches have left the rights of same-sex partners up to the people to decide, said Newsom, who concluded, “So the people have to make a case, and stand up for their rights.”

As to your Democratic, career, Socialists. Notice how they all get real center thinking when they are running for office and then look out when they get elected, off to the left wing.